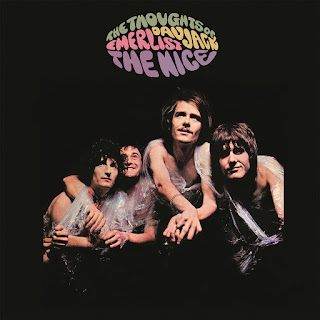 Digging back into my stash of 60s UK psyche again...

While largely viewed as a brief weigh station for Keith Emerson before putting together ELP, The Nice were actually pretty decent, and their debut with the funny title (cribbed from the band members' last names) is a surprisingly entertaining psychedelic, pre-progressive rock trifle. Yes, Emerson's keyboard bombast is already threatening to edge out the rest of the music, but for the most part the album avoids some of ELP's excesses (which isn't to say it avoids the excesses of late 60s psychedelia, but at least those had a certain lysergic charm).

The title track is an absolutely killer single, with a big, boomy, anthemic chorus that really elevates the song (whose verses are a bit meh) into the stratosphere. Equally great is album closer "The Cry of Eugene," a nice slice of blissed-out psychedelia, melodic and trippy, one of the better examples of circa-67/68 sonic creativity. Opener "Flower King of Flies" and "Tantalising Maggie" also capture the musical experimentation of the era, a bit dated yet fine. Elsewhere, Emerson is less successful keeping his extravagance in check, songs like "Rondo" and "War And Peace" feeling like dry runs for the ELP bombast. Ultimately, one's enjoyment of the album will turn on one's appreciation of ELP, though "Thoughts" and "Eugene" make a solid bid for top-tier psychedelic status even for non-prog-fans.

The band's biggest limitation (Emerson's grandiosity aside) is arguably Lee Jackson's vocals, which can grate a bit, and go a ways to explaining Emerson's decision to later latch onto Greg Lake's far more admirable pipes.

...and "Cry of Eugene" with trippy imagery: