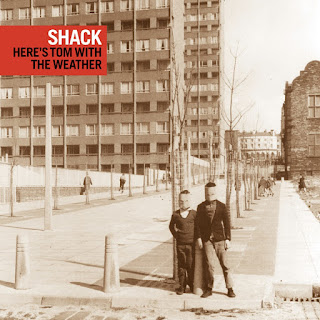 Here's a truly gorgeous album from a band that, as far as I can tell, has never gotten much (any?) attention here in the States.

Shack are fronted by Liverpool-based brothers Michael and John Head. They originally formed the Pale Fountains, another UK act with little footprint, releasing two fantastic 80s albums of jangly, literate, haunting Britpop, sort of blending the Smiths and Talk Talk and Paul Weller and the Housemartins, with hints of the Cure. They later formed on again/off again act Shack (as well as another spin-off group, Michael Head & The Strands).

While I like all of their music, I'm a big fan of Shack's fourth LP, Here's Tom With The Weather. It's a quieter, more melancholy affair, softening their very British pop music with 60s folk a la Simon & Garfunkel (and the Byrds, recognized in the tune "Byrds Turn To Stone") as well as sophisticated Burt Bacharach-like pop. The songs are gently engaging and often quite lovely. Check out opener "As Long As I've Got You," the best Paul Simon song he never wrote. There are some more upbeat moments like the infectious "On The Streets Tonight," while "Chinatown" adds some raging guitar jams out of the Neil Young & Crazy Horse playbook, but most of the record is on the softer side, with jangling acoustic guitars and just a waft of strings.

It's a wonderful little gem, one which really deserves more attention stateside.

...and "Soldier Man":Audio rip of "On The Streets Tonight":