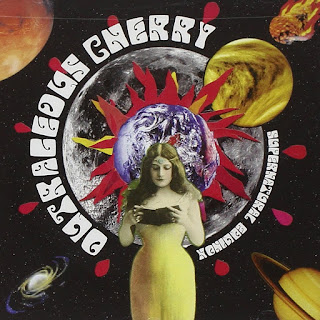 Outrageous Cherry are a midwestern indie band that have been quietly kicking around for quite a while, steadily releasing albums since the '90s. Their sound blends jangly, melodic power pop with trippier psychedelia and '60s-styled garage rock. There are strains of Paisley Underground bands like the Rain Parade, though one of the closest analogs is the like-minded Asteroid No. 4.

2003's Supernatural Equinox is particularly strong, a stylistically diverse album that successfully taps into their various influences. Album opener "Girl You Have Magic Inside You" is terrific, a spaced-out psychedelic groove yet still poppy, like some long-lost Nuggets track circa '68. There's post-British Invasion Stones-y pop on tunes like "A Song For Someone Sometimes," "This Evening," and "Desperate Times, Desperate Measures" (and check out that bubbly sunshine pop chorus in "Saturday Afternoon," buried in a darkly lyrical piece), as well as more deliberate stabs at riff-driven stoner jams like the title track and the raging "Orgone Vortex." A tune like "See Through Everything" manages gorgeous electric  folk that would do the Byrds proud. Sprawling closer "See You Next Time" starts off with a sweet Paisley Underground tune before heading off into sitar-abetted deep space. Great stuff.

...and "Desperate Times":Sadly, the album doesn't stream (though for some reason, when I do a Google search, I can pull up a partial version of the album on Spotify), but if you'd like a taste of the band, here's a pretty decent greatest hits collection: