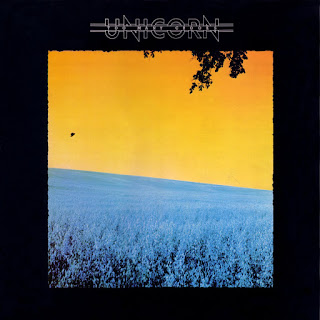 Here's another surprisingly decent (a polite way of saying not necessarily great, but perfectly enjoyable) British band that never got much attention here in the US (don't know if they got much more love in the UK). They released four proper studio albums in the 70s, all of which sound... well, very 70s.

Despite a name and artwork (and some instrumental leanings) that suggest a prog band, Unicorn were much more into pastoral, psychedelic-country-tinged, middle-of-the-road Americana, through a British lens -- I suppose it would qualify as what's come to be known as yacht rock, with smooth harmonies and gentle tempos. (See also the first Brinsley Schwarz album.) For 1976's Too Many Crooks, their third album, they got Pink Floyd's David Gilmour to produce, and it sounds great, with the sort of attention to detail you'd expect from a Floyd-related release, though without gimmicks, just comfortably rich ambience.

The stand-out here is their finest moment, "No Way Out Of Here," which Gilmour decided to nick, covering it (pretty faithfully) on his solo debut a couple years later. It's a wonderful track, a killer guitar hook and haunting harmonic choruses; the Gilmour version's a little better, given the familiarity of his voice and guitar sound, but, still, it's plenty fine in its original form. The perky "Bullseye Bill" is comparably great, calling to mind psychedelic-minded pub rockers like Help Yourself.

Three of the band's albums got a nice box set treatment last year, with oodles of bonus tracks (for some reason they omitted their 1971 debut, a folkier, more stripped-down record a little more reliant on CSN/Grateful Dead tropes).