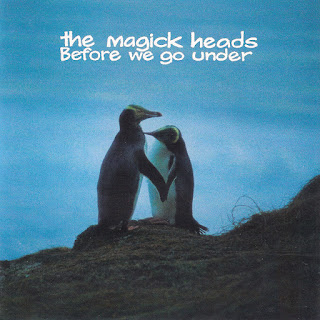 I've written a few times about my enduring love of the Bats, one of the longest-running bands in New Zealand's indie rock scene. (I've got a Bats Top 10 coming out soon on Toppermost; watch this space!) During that band's 10-year sabbatical, frontman Robert Scott--who also does double-duty as bassist and occasional singer for the Clean, another key NZ band, in addition to recording a few solo records--released a couple records with his side project, the Magick Heads.

The Heads featured Jane Sinnott on lead vocals (though Scott shared vocal duties), incorporating a bit more Sandy Denny-styled British folk into their sound, but for the most part sounding, unsurprisingly, a lot like the Bats. So if you already like the Bats, you'll love the Magick Heads. And if you don't already like the Bats (weird, I know)--well, you'll still love the Magick Heads, as the songs are great. Jangly, pastoral folk-pop that calls to mind the Feelies (and, more so, Feelies-adjacent Speed the Plough). Sinnott's vocals are lovely, making Scott's already pleasantly engaging music all the more enchanting (and making me wish Scott let Bats guitarist Kaye Woodward take a few more leads on their songs).

Their albums may be hard to track down (though I think can be found as imports), but stream on Spotify.

Here's an audio rip of "Standing":

And the title track:Here's a brief live clip: