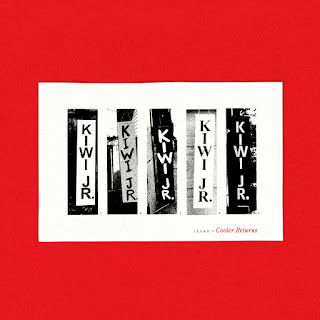 First 2021 release making an appearance here, and while I still haven't had a chance to fully digest it, this will no doubt be among my most-listened-to new pick-ups this year, so figured I'd get a quick endorsement out into the universe.

Canadian indie rockers Kiwi Jr. had my favorite album of 2020 (though released the prior year in their homeland) -- Football Money deftly combined the shaggy garage band pop of the New Zealand "Kiwi Rock" scene (the source of their band name? dunno), bands like the Clean and the Bats, with the revered '90s slacker indie sound of Pavement. It was one of the few albums that managed a repurposing of that '90s indie aesthetic while still sounding wholly fresh.

The sophomore album is... well, on first listen, more of the same. Which is great. It may lack the novelty and immediacy of the debut, only natural, but the tunes are still there. But with some of the lightning-bolt-freshness of the first one obviously impossible to replicate, the wordiness of the tracks is all the more apparent. That's not at all a bad thing, but makes this the sort of record that needs a couple spins; on first listen, you pick up the hooks and some stray wordsmithery that leaps out at you; but you need that next listen for and marvel at the record's humor, the band's sense of whimsical absurdity and observational astuteness, the relentless guitar riffs more like delivery devices for the occasional head-slapping turn of a phrase.

Of course, a few tunes grab you on first listen -- the frenetic pop of "Maid Marian's Toast" (shades of the Young Fresh Fellows?), the slowed-down mid-tempo jangle of "Only Here For A Haircut," the delightful catchiness of "Guilty Party" and "Omaha." But I'm going to have this on auto-repeat for awhile, my favorite songs undoubtedly shifting in the weeks ahead.

How about a few of the new videos?