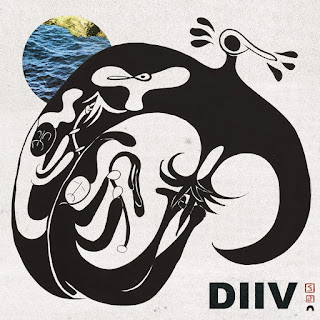 Brooklyn-based latter-day psychedelic rockers DIIV have had a fairly deliberate releases schedule, with just 3 albums since 2012, but all make for nice, ambient yet lively mood pieces.

2012's debut Oshin sounds like a blend of bass-driven moody goth rock a la the Cure or Cocteau Twins coupled with more pastoral jangle reminiscent of Real Estate or the War on Drugs -- all tucked firmly behind a dense wall of reverb. The result is kinda schizophrenic, a batch of dreamily zoned-out atmospherics overlaid with enough pop hooks and brightness to make for a nonetheless pleasant and engaging vibe. A few ambient instrumentals aside, it's primarily a vocal work, though the layers of dense echo make the vocals largely blend in with the rest of the music. The guitars tend to shift into intricate fugue patterns, like ambient post-rock, but the tunes are pithy and perky enough to prevent drifting into the background.

"Past Lives," after a brief instrumental opening track, greets the listener with a wash of dreamy sonics but a catchy, driving melody, like the Cure's Disintegration after a few cups of coffee. Some tunes ease into mellow, hypnotic grooves, cascading guitars everywhere, like "Air Conditioning," while at other times the band slips into overdrive, songs like "Doused" more like early Cure (with shades of Joy Division or U2).

Cool stuff, check it out. (Or for a band with a similar post-psychedelia sensibility but slower and mellower, check out the Flavor Crystals.)

Here's the video for "Doused":