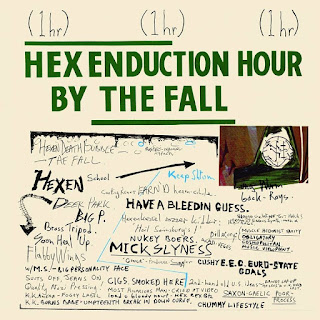 Apparently today is Fall Friday -- not sure why, but woke up to a bunch of Fall-related posts on my Twitter feed, and felt inspired to kick the morning off with some Fall. As noted previously, I'm partial to the band's albums from the mid- and late-80s, when Mark E. Smith's then-wife Brix added a slightly more pop-oriented sound to Mark's bitter miscreant rantings, polishing (slightly) the band's art-damaged post-punk aesthetic. Still, their fourth album, 1982's Hex Enduction Hour, is probably their first great album, and one of the records that introduced me to the band back in college (thanks, Chris!).

It's certainly a challenging album, not something I recommend to friends, but for anyone with at least some attraction to the band it's a riveting listen. Or, at least for me, the half I like is pretty great; some of this is beyond my patience level. Still, the great half makes it pretty damn captivating.

The stand-out track is opener "The Classical," to this day arguably the single greatest song in the band's 30-or-so studio album discography; the not-safe-for-radio lyrics are among Smith's most memorable, but it's the dual-drummer percussive attack that really nails the landing. It's a tour-de-force, a defining moment for a band with many defining moments. I'm also taken by the slow, lumbering "Winter," a two-part suite with a driving bassline, repetitive but entrancing. "Jawbone and the Air Rifle" has a catchy hook that foretells the near-pop sound that would enter the picture with Brix's arrival, though it's still of a piece with the rest of the album's motif of Smith's jagged exclamations over bracing rhythms; and "Who Makes The Nazis?" is another one where the rhythm section creates a distinctive backdrop for the jagged guitars, weird grunts, and Smith's bluster.

I'm less partial to the draggy "Hip Priest" and the endless closing "And This Day," but, still, on balance it's an indispensable landmark of post-punk artistry.