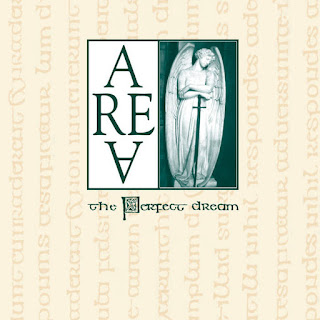 The highlight here, "With Louise," is actually a rehash, adapting a song from keyboard/percussionist Steve Jones' earlier band, The Arms of Someone New--I've written about them before and you really ought to check them out--but the knock on them was the lack of a decent vocalist, plainly remedied here. Other tunes like "Disappear Here" and "The Blue Spark" replicate a similar sound, while some, like "Sympathy," are more like straight ballads, Canfield's hushed croon with only the lightest instrumental accompaniment. As on their other albums, Area occasionally veer into more upbeat electro-pop ("Why Should I Worry"), falling somewhere between Gary Numan and the Cure, but this is largely a somber affair--the album closes out with a drawn-out ambient piece and a Leonard Cohen cover--best saved for sleepy, foggy mornings.

Find it on Bandcamp. (After several albums with Area, Canfield released several 90s albums with The Moon Seven Times, a like-minded but more varied outfit.)

Here's an audio rip of "With Louise":

And a video set to "Why Should I Worry" (interestingly, sped up on YouTube and sounding more like a dance track than the actual album recording):