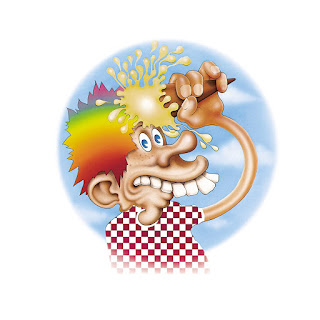 Looking for the perfect celebratory song on Inauguration Day, I set aside my anger at what's transpired over the past four years -- Hüsker Dü seemed to be an obvious starting point, but I was feeling happy (relieved?), not angry -- and settled on the Dead's timeless "He's Gone" (an allegory of sorts for the slippery departure of their manager, drummer Mickey Hart's father, with a fistful of the band's money). And while it was a steady part of the band's live set since its 1972 debut (meaning countless versions in my music library to choose from), I opted for its original recorded appearance, on the triple-LP live set Europe '72.

This album was one of the first I picked up when the switch was flipped back in college, and I shifted from someone who disdained all things Dead into someone who hung on their every note. (Every Dead fan has an origin story; mine is recounted in Jittery White Guy Music, and previously excerpted here on the blog.) Europe '72 is in some ways the perfect "hybrid" Grateful Dead album. It captures the live sound of the band at the time, though, as with the preceding live album, 1971's Grateful Dead, it largely eschews the longer exploratory jams, save for an extended "Truckin'" (its jam tracked as the separate "Epilogue") and show-closing "Morning Dew" (its opening, noodly jam likewise tracked separately as "Prologue").

But it's also akin to a studio album, debuting a number of great new songs that went on to become perennial favorites, among them the afore-referenced "He's Gone," "Tennessee Jed," "Jack Straw," "Brown-Eyed Women," and "Ramble On Rose." (I've read that the band had originally intended to release a studio album at the time, possibly entitled Rambling Rose, but the album never materialized and these songs exist solely in live form.) And above jams aside, it sounds like a hybrid live/studio album; though culled from various performances on the band's 1972 European tour, the album was given studio overdubs, with most crowd noise removed, so it (for better and worse) doesn't sound like a live performance. That may have been the appeal for me when I first heard it; while I was finally turned on to the band by their live tapes, enjoying the hissy cassettes a friend had lent me, I was just starting to appreciate them as a studio outfit, appreciating their songcraft without the live mystique, and Europe '72 served as a helpful transition.

For serious fans, the album has been rendered largely moot, a 73-disc box set from a few years ago capturing all 22 shows from the tour in their complete form, without studio embellishments, for a much more accurate representation of the band's live sound. (The entirety of this box streams on Spotify, BTW.) For those not quite up for that deep (and expensive) a dive, the band also released a more compact sequel, Europe '72 Vol. 2, which gathers the balance of the songs performed on the tour, as well as providing a better view of the band's jamming side, with lengthy versions of "Dark Star" and "The Other One."

Still, there is a certain magic to the original collection (even as later appended with a few bonus tracks, most notably an extended "Good Lovin', which will be of interest primarily to those who enjoyed Pigpen's throaty blues vamps; it makes for a fine memorial to the keyboardist/bluesman, who died shortly after the tour). The album holds up today a great entry point for newbies, particularly those not quite up for the jammier, more psychedelic side of the band (found on 1969's Live/Dead) but who appreciate the craft of their songs freed from the constraints of the studio that did not always serve the band well.