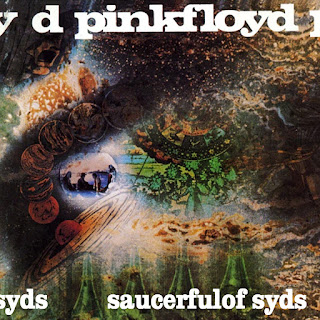 Another imaginary album constructed for my own listening pleasure...

Pink Floyd's 1967 debut album Piper at the Gates of Dawn, focused primarily on the acid-drenched pop-art songcraft of band founder Syd Barrett, is unlike anything else in the Floyd catalog (if not unlike anything else, period). As well-documented elsewhere, visionary frontman Barrett succumbed to mental illness, undoubtedly exacerbated by extensive LSD usage, and was replaced by guitarist David Gilmour after its release. The band's sophomore effort, A Saucerful of Secrets, tried to recapture some of the trippy whimsy of the debut, but while it's not by any means a bad album, it lacks Barrett's magical touch. It's somewhat disjointed, the other members trying to find their songwriting chops -- keyboardist Richard Wright aimed for Barrett's nostalgic whimsy, Roger Waters was still a ways from the dark lyrical genius he'd later become, and Gilmour wasn't yet a major presence. Songs like Waters's "Set The Controls for the Heart of the Sun" (the only track on which all 5 band members play) and the epic title suite signaled the cosmic space-rock they'd champion over the next few years before Dark Side of the Moon launched them into their full-on prog/classic rock concept album mode. Barrett played on a few tracks, but the only true song of his is the album-closing "Jugband Blues," a true wonder rendered deeply disturbing given his mental state at the time.

For whatever reason, the album did not include a number of Barrett-helmed recordings from the era, some of which were released as singles, some of which remained in the vaults (aside from various bootleg versions) until a recent box set made them officially available; additionally, a few post-Barrett singles (a couple of which were later collected on the Relics odds & sods collection) make for stronger stand-alone tracks than much of what made the cut for the album.

I've tried my hand at a more balanced follow-up to Piper, extending the original Saucerful album into a double-LP by incorporating more of the Barrett material and contemporaneous singles (plus a lone Barrett solo track). I think it makes for a far better sequel.