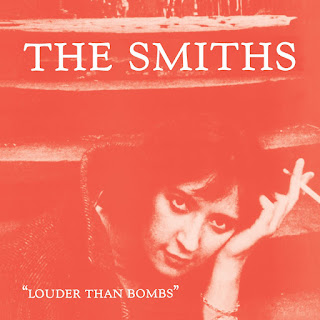 Sorry, I'm just not a big Smiths fan. I realize this is blasphemy to many of my fellow music lovers. But as much as I like a lot of their songs, and the overall Johnny Marr guitar vibe, I rarely make it through an entire Smiths LP, finding most of the greatest hits collections out there are more than adequate. If pressed to pick a "proper" album, I fall back on Louder Than Bombs, which of course is NOT a proper album, but rather a somewhat haphazard collection of singles and b-sides and alternate versions; yet despite (or perhaps because of) its resulting lack of a cohesive sound, it's one of the few Smiths releases I enjoy from start to finish. Mostly.

Should I be apologizing for my lack of Smiths fealty? I'm not sure. But here's what I had to say about them in Jittery White Guy Music:


The one band that completely saturated the college airwaves while I was there, yet never really did it for me, was the Smiths. I recognize there is something sacrilegious in making this confession. Many in the DJ crowd, and, indeed, a lot of friends from other walks of life, hold the Smiths in the same esteem as I do R.E.M. If anything, the Smiths engender even greater attachment from their disciples, seemingly stable individuals nonetheless bowing at the church of Morrissey. My friend Tom from the station was deeply devoted to the band; another classmate and fellow DJ, who went on to become a professional journalist, went so far as to pen a book on Gen X culture in which he lionized the Smiths.
On paper, they check off a number of boxes that should work for me. Johnny Marr’s stylized jangly guitars are certainly winning, fitting in nicely alongside all those other guitar bands who held me in their sway. And there are plenty of compelling singles that latch onto you and found their way onto my radio shows and have been key ingredients of countless mixtapes over the years—“Girlfriend in a Coma” is a great song; “Ask” is a great song; “How Soon Is Now?” is obviously a great song. But I found that a little Morrissey went a long way. I respect him as a lyrical wunderkind who can lend a poetic voice to maudlin sentiments not found elsewhere, but maybe I just wasn’t mopey and maladjusted enough in college for this to gel for me.
Anyway, I just felt I should come clean about this.