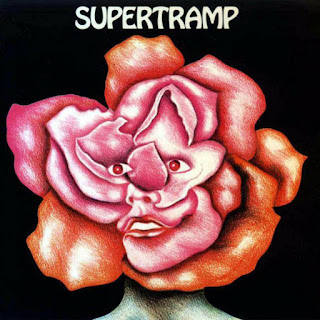 I suppose this is another one from the guilty pleasures file.  'Cuz let's face it; Supertramp is singularly uncool.  Here's what I had to say about Supertramp in my book:


Most of the used record stores were operated by grumpy, middle-aged men lacking any discernible social skills and showing little interest in customer service, particularly when you’re a 16-year-old kid thumbing through the $2 cut-out bins in the back of the store and unlikely to splurge for the $50 first pressing of Badfinger’s Magic Christian Music displayed on the wall behind the register.


Occasionally one of them would take a little pity on me and try to be helpful. “Trust me, kid, you’re not gonna like the Supertramp, it’s deathly dull. Why don’t you check out this Nick Lowe album, you’ll be much happier with it.” They were usually right.

Yet the band's eponymous debut -- undoubtedly their least heralded album, omitted from Spotify (at least in the US) and almost entirely ignored by radio and the various Supertramp compilations out there, and shunted aside by the band in live performances -- is something that I've always enjoyed.  Despite that god-awful cover art.

Like most kids back in the 70s, I first encountered Supertramp through the omnipresent Breakfast in America; as a 13-year-old in 1979, "The Logical Song" and "Goodbye Stranger" and "Take The Long Way Home" and the title track were on constant rotation on the local FM stations.  As a classic rock nerd, I dutifully checked out some of their prior albums.  And while I generally found their blend of mellow pop and straightforward rock and light prog a little on the dull side, I did enjoy a few things, particularly some of the stand-out tracks on 1974's Crime of the Century and 1977's Even in the Quietest Moments.

But the album that oddly enough grabbed me was the debut, even though it really didn't sound like the rest of their catalog.  Rather, it was much jazzier and heavier on the jams, deeply indebted to Traffic (and sounding a bit like early Genesis).

Following the album's brief intro, "It's A Long Run" is just... fantastic.  Why the band didn't consider this a highlight for later best-of purposes is a mystery.  Somewhere between Traffic and Santana, it's a basic repeated riff with extended jams, but one that's been stuck in my head for decades.  "Nothing To Show" is a similarly solid jam workout, more frenetically upbeat with organ washes, some almost garagey post-psychedelia.  And the extended "Try Again," despite some quieter passages, calls to mind late 60s Pink Floyd, with some spaced-out meandering and trippy jams, and in spots presages Genesis' work circa Foxtrot.

Other pieces are quiet ballads, maybe less instrumentally interesting but awfully pretty, occupying the space between prog and British folk rock.  Fine, these songs aren't particularly memorable, but they aren't bad, and they're on the whole more pleasant than a lot of their later work, which I could sometimes find a little grating.

Anyway, swallow your cynicism and give it a spin sometime.

Here's an audio rip of the entire album (though for some reason, the YouTube user has the songs out of their proper running order).
Here's "It's A Long Road":
Here's "Try Again":