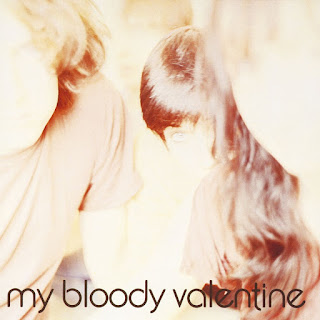 My Bloody Valentine have been showing up in my news feeds lately... apparently yet another reissue program underway (and the return of a chunk of their catalog to streaming media, though the early stuff is still absent). So it seems like a good excuse to pull out my old copy of Isn't Anything, their stunning and disorienting debut album (not counting a number of singles & EPs that preceded it). It's not something I play nearly as often as the delightfully astounding follow-up, 1991's Loveless, but it still sounds pretty damn cool after all these years.

I wrote about my initial impressions of the album, which made a real impact on me at the time, in my book--so, yes, time for another plug. Please check it out on Amazon if you haven't already. (Or just read a few excerpts on my home page.) Here's what I had to say about Isn't Anything:

And then there were the various bands pigeonholed, fairly or not, into the shoegaze genre, jangly psychedelia crossed with dance-floor grooves and updated with a post-Jesus and Mary Chain gauze of feedback and distortion—Ride, Lush, Curve, House of Love, and others I’ve long since forgotten but for their intermittent revival via reunion tour or box set compilation. The shoegaze bands, through their sugar-coated discordance and rush of sonic overload, echoed the disorientation and dislocation I was feeling, perfectly in-sync with my tenuously out-of-sync mindset.

And of all these bands, the one that seemed to best encapsulate my emotional state at the time, for better or worse, was My Bloody Valentine.

Their album Isn’t Anything came out in the dead of winter during that first year of law school, and, like the Stone Roses record a few months later, received a ton of hype, enough to reach even those pretty well insulated from the indie music scene.

And that album was terrifically fucked up.

At heart, My Bloody Valentine was another retro-leaning psychedelic band, only it sounded like someone had taken the master tape and twisted it and stomped on it and altered it into something strange and disturbing; guitars would transform from pretty acoustic jangles into chainsaws, ethereal vocals appeared and disappeared from the speakers, tempos slowed down and sped up, drumbeats paused and restarted. You’d hear the makings of a great sixties pop song, only someone left the vinyl near the window on a sunny day and everything was just a little warped and out of phase. The whole thing was both achingly familiar yet strangely disorienting.

It was the first album I’d owned which actually affected me physically, and not in a good way. Listening to Isn’t Anything felt like mild motion sickness. You’d put on headphones and board the biggest roller-coaster at the local Six Flags, exhilarating on the way down, but then you’ve got this residual vertigo that makes you take a pass on the corn dogs for the next hour.

Now, this raises the obvious question of why someone would voluntarily listen to something that’s actually a little nausea-inducing, as when my wife asks why I insist on joining our kids on X2 at Magic Mountain even though I know that by the fourth loop my stomach will be halfway up my throat and I’ll need to sit down for a few minutes afterwards. But there are plenty of albums I will occasionally take for a spin even though I don’t necessarily enjoy them on a purely aesthetic level. I will freely admit that many components of the rock snob canon give me no pleasure, Captain Beefheart’s Trout Mask Replica and the second Public Image Ltd. album and Pere Ubu, music you’re supposed to lionize to maintain your rockist cred; yet I’ll still listen every now and then, if only because of the visceral sensation one gets from challenging art, something that can be captivating in its strangeness and refusal to cater to your comfort zone.

In the winter of 1988, pummeled by waves of claustrophobia and tension, far from my girlfriend, on the precipice of actually needing to seriously contemplate my future, I was juggling feelings of spiritual upheaval; an awkward weigh station between those college years disappearing behind me and the real world quickly approaching. If those feelings emitted a sound which could be captured on tape, it would have been that My Bloody Valentine album.

The Primitives, the Stone Roses, the Charlatans—those bands put a veneer of joy on things, a smiley-face Band-Aid on a small cut; MBV honestly depicted what was underneath.

Which doesn’t mean it was something I played very often. I gave it an occasional spin and set it aside, but it stayed with me long afterwards. Musically speaking, I am far more partial to their 1991 follow-up, Loveless, which is even more sonically adventurous, and much, much louder… the kind of album that, even if you play it at whisper-quiet levels, just feels blisteringly loud, but is ultimately a more enjoyable listen, losing that queasy feeling permeating Isn’t Anything. But there was something deeply personal about hearing that first album in the moment, something consoling, like, it’s ok to feel this way, out of it and just sort of in-between, and someone even went and recorded a soundtrack for the space you’re in.