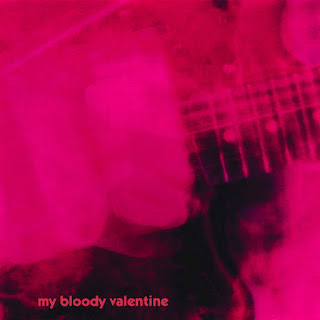 I bought My Bloody Valentine's prior album, 1988's Isn't Anything, during my first year of law school. I was feeling a little out of sorts, emotionally at sea, during the time -- I was hunkered down in a claustrophobic and intense environment in the chilly, isolated Hyde Park neighborhood of Chicago, and my girlfriend was off in distant New York. Musically, it felt like the glory days of 80s college radio that had been such a lifeline for me were fading. Isn't Anything seemed to capture that feeling of disorientation; it was odd-sounding, like the band had recorded a trippy album of retro-psychedelic pop and then left the tapes in the sun, the music weird and warbly and strangely off-kilter; it was the first album I owned which actually made me feel physically queasy, like being seasick; so while I thought it was pretty damn great, gorgeous in spots, I didn't actually play it very often.

Three years later, they followed up with Loveless, an even better, sonically rich album that retained much of the auditory weirdness, amped the volume up to 11, and slightly stripped away (or at least buried under layers of guitar and studio wizardry) the intriguing but unsettling aspects that made the predecessor a little hard to ingest. Loveless firmly established the shoegaze blueprint -- psychedelic pop with a sheen of fizzy noise, hints of dance-floor beats but ultimately better suited for shattering your home stereo speakers. This one doesn't make me seasick, but it's still frequently disorienting.

Lead-off track "Only Shallow" introduced both the holdover aspects of the band and the new Loveless approach. A crazy-loud sonic assault with guitars sounding more like chainsaws, herky-jerky tempos that feel just a bit off, but then it resolves into a mellower vibe with haunting, largely indecipherable female vocals working more as another instrument in the impossibly dense mix than as a lyrical tool, like the Cocteau Twins on... well, I don't know what they're on, but it's a little scary.

The obvious stand-out on the album is the closing track, "Soon," from an earlier single. It's more of a traditional dance track, with an insistent riff anchoring the lengthy tune, synths (or something?) joined by a wall of buzzsaw guitars and those spooky vocals. But at least it has a more predictable tempo and the volume variations are less jarring -- it's almost pop but for thick wall of sound and, as usual, fucked-up guitar sound. "When You Sleep" is another favorite, an inviting melody and blended male and female vox, again nearly approaching pop, but again the slightly bent sound of the guitars (a bit reminiscent of Isn't Anything) introduce that disorienting feel to the song and keep it from just slipping into the background.

I don't find Loveless an easy listen; it's not the sort of psychedelia where you slide on the headphones and kick back and relax. But it's trippy in its own way, and oh so loud... it doesn't matter where you set the volume, it just sounds loud. While other shoegaze acts have imitated the album's sonic palate, it's truly a unique album, one where I find myself getting lost in the haze of the music, wondering, "how do they make it sound like that"?

Here's the "Soon" video, a perfect visual encapsulation of the band's vibe:
...and, similarly, the "Only Shallow" video:
Here's a live run through "When You Sleep" live; doesn't capture the hypnotic lure of the studio version, but gives a hint of what it means to be know as one of the loudest live bands ever:

BTW, a few years back, a guy named Kenny Feinstein recorded an entirely acoustic version of Loveless.  It's kinda interesting, a way to enjoy the album's songs without frightening the neighbors.