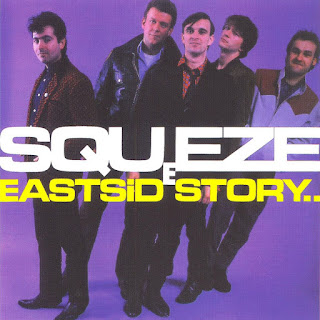 I think we are each allotted a finite number of "albums that changed my life" -- invoke the hyperbole too frequently and it becomes meaningless.  But Squeeze's 1981 flawed masterpiece East Side Story easily makes my shortlist.

I first heard Squeeze in 1983, during my junior year of high school, when my friend Scott and I drove up to Ann Arbor to visit my cousin at the University of Michigan.  We were about to enter college application season and spent the weekend soaking up Big 10 life.  (Ultimately, neither Scott nor I ended up at Michigan, or at any other Big 10 school, breaking with the bulk of our high school graduating class.)  While we did the usual college visit stuff, the thing that made the biggest impact on me was hearing this album playing in my cousin's room at the fraternity.

At the time, I considered myself pretty knowledgeable about rock music.  I'd spent most of high school hanging out in the record stacks at the public library and haunting the used record stores in Evanston, Illinois, trying to get my arms around the classic rock canon, with various diversions into prog, punk, and new wave.  I knew from these explorations that there was a lot of interesting music outside the mainstream that wasn't getting a lot of attention on the radio or MTV, but most of this was weird (i.e. some of the fringe post-punk bands I'd see on late night cable video shows) or understandably out of vogue.

But hearing Squeeze for the first time -- this wasn't weird, or challenging, or otherwise understandably outré.  This was perfectly wonderful straight-ahead pop, one of the rare bands earning the "Beatlesque" tag, the sort of thing you could easily imagine dominating the radio and MTV -- yet it had completely escaped notice in my little suburban bubble.  Which was a real wake-up call:  If this amazing little band was making great music that wasn't penetrating the popular landscape (at least here in the States), how many others might there be?  And I was convinced that, once I got to college, everyone I met would be playing the coolest music, and I'd be exposed to tons of great stuff that had been kept hidden from me in high school.

It turned out this was overly optimistic; when I got to college in '84, almost everybody was listening to the same albums dominating the radio (mostly Born in the USA and Purple Rain) or the usual crappy MTV fare (i.e. Duran Duran, Culture Club).  But I found my way to the college radio station and discovered bands like R.E.M. and the Replacements and the Feelies and so many others which realized the promise of East Side Story.

Anyway, that's my Squeeze tale.  Stand-out tracks include pop masterpieces "In Quintessence," "Piccadilly," "Woman's World," "Is That Love," "Mumbo Jumbo," and of course the stunning "Tempted" (fronted by short-lived band member Paul Carrack).  But the whole thing is pretty close to perfect (though I usually skip the minor key dirge "F-Hole" and the faux-country "Labelled With Love").

Here's the "Tempted" video:
Here's a live run through opening track "In Quintessence," which totally hooked me on the band from its opening notes:

...and a more recent run through "Is That Love," live in the studio:
File Under: 1980s New Wave Power Pop Squeeze