Neutral Milk Hotel: In The Aeroplane Over The Sea (1998) 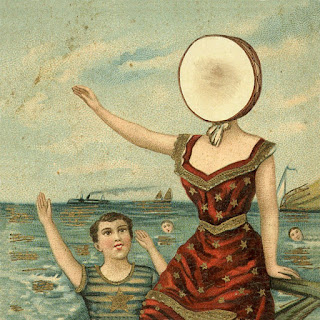 I held off on posting this for as long as I could.  It's not an album I recommend to many people; between the intense and occasionally disturbing lyrics, the sometimes noisy and cacophonous (but just as frequently gorgeous) songs, and Jeff Mangum's not exactly silky-smooth vocals, it's an album that turns a lot of people off.  Indeed, that it has such a devoted following among many has always been somewhat surprising.  I loved it from the very first listen, but I've always viewed it as one of those deeply personal things, a record that moved me and deeply affected me but in a way that clearly was going to have limited appeal to others.

So with that less than bold endorsement, what do we have?  One of the most remarkable musical and lyrical accomplishments of the past couple decades.  NMH were among the core of the Elephant 6 indie pop bands of the 90s, with frontman Jeff Mangum working on projects alongside the Apples in Stereo and the Olivia Tremor Control.  But whereas those bands offered more straightforward retro psych-pop with elements of power pop, Mangum was always more idiosyncratic.  His earlier work was distinctly lo-fi and off-kilter.  The band's first proper album, On Avery Island, was pretty great, Mangum's lyrical intensity and vocal commitment already prominent, with few signs of the Beatles/Beach Boys reverence found in most of the other Elephant 6 bands.

But Aeroplane took it to a whole new level in a way one might not have expected from that first LP.  It's an emotional rollercoaster, with dramatic production by Apples frontman Robert Schneider.

Much has been written about Mangum's fascination with the Diary of Anne Frank while writing this material, and the recurring Holocaust motif within the lyrics is part of what sets the album apart and makes it so rich and emotionally intense; but one needn't try to ferret out those references to find the work moving.  While there are some literal references, most of the lyrics are allegorical, rich in imagery from which one can spin whatever tales seem to make the most sense.  And in some ways, the graphic and symbolic descriptions of love and sex and bodily functions are as haunting and disturbing as the tales of genocide.

The album starts off simply enough with "King of Carrot Flowers," just an acoustic guitar and Mangum's double-tracked vocals, folky-pop that sounds pleasant enough (but for the lyrics about a young couple discovering sex while their parents battle downstairs).  But then it becomes an extended suite, first Mangum's heartfelt plea of his love for Jesus with weird, burbling orchestral sounds, before devolving into a thrashing all-out rocker that leaves you breathless by its big finish.

The title track returns to acoustic territory, a chance to catch your breath, and it's lovely.  The following tune, "Two Headed Boy," sticks with the acoustic sound, but Mangum leaves the pretty pop behind, with cryptic lyrics and plaintive vocals.  And then a quick instrumental interlude before...

"Holland 1945."  The centerpiece of the album, the one tune ensuring immortality for Mangum and Neutral Milk Hotel.  This is the one that pulls from the Anne Frank story, sad and wrenching lyrics, but wrapped in mythic imagery.  It's big and loud and distorted and noisy and an emotional gut-punch without rival. Selected lyrics:

"The only girl I've ever loved was born with roses in her eyes
But then they buried her alive one evening 1945
With just her sister at her side
And only weeks before the guns all came and rained on everyone
Now she's a little boy in Spain playing pianos filled with flames
On empty rings around the sun all sing to say my dream has come.
But now we must pick up every piece of the life we used to love
Just to keep ourselves at least enough to carry on...

And it's so sad to see the world agree
That they'd rather see their faces fill with flies
All when I'd want to keep white roses in their eyes."

And that's just the first half of the album.

But enough chatter.  It's something that needs to be experienced directly.  You may hate it.  Or it may change your life.  (Apparently it was a pretty emotionally intense album for Mangum as well; he disbanded NMH shortly thereafter and pretty much disappeared from public view save for some reunion performances.)

Here's a lyric video for "Holland 1945":
And another video for the same song, this one with crazy 3D animation:
Here's another lyric video, this time for "King of Carrot Flowers, Pts. 1-3":
...and here's the title track, performed live during one of the reunion shows: