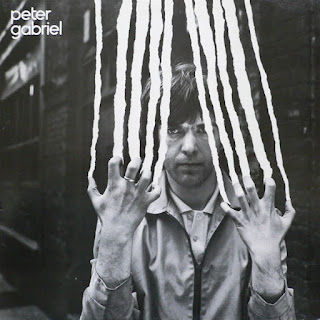 My favorite post-Genesis solo Peter Gabriel album tends to rotate among the first three self-titled records (though the fourth, Security, is right behind; I'm much less enamored of his big breakthrough, So, despite--or maybe because of--its immense popularity). I think the second, nicknamed Scratch owing to its cover art, is the most eclectic, perhaps lacking the killer stand-out track of the debut's "Solsbury Hill" but still packed with some excellent songs.

The album was produced by Robert Fripp (during his late 70s break from King Crimson), who also plays guitar on a few songs, though the telltale sounds of his Frippertronic guitar effects are largely absent aside for the creepy, hypnotic "Exposure." (I think the album would have benefited immensely had it included the Gabriel/Fripp reworking of the debut album's "Here Comes The Flood," a breathtaking opus instead included on Fripp's Exposure record.)

There are a few catchy pop tracks here, most notably the delightfully infectious "D.I.Y.," as well as the almost abrasively rocking opener "On The Air" and the charmingly funky "Wonderful Day In A One-Way World." "Animal Magic" is a solid rocker, while the punk-tinged "Perspective" verges into Kinks territory. But I particularly like some of the quieter, moodier pieces. The piano-driven "Mother of Violence" is simply gorgeous, a personal fave; "White Shadow" leans a bit more into Gabriel's Genesis-era prog, while closer "Home Sweet Home" is a sax-heavy ballad that almost recalls Springsteen (presumably owing to E Streeter Roy Bittan on keyboards).

It's not a perfect album, a bit draggy in spots, and despite Fripp I always found the sound a little claustrophobic (though recent remasters sound much better). But it still holds up pretty well, sounding less of its era than some of his 80s work.

...and a lovely live "Mother of Violence":Not on the album, but here's that Gabriel/Fripp collaboration on "Here Comes The Flood":