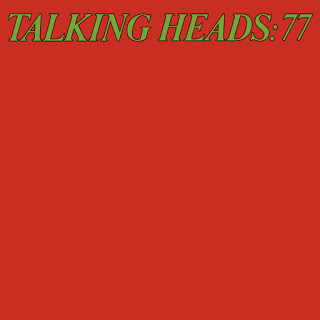 Growing up in the suburban Midwest, our exposure to the early punk and new wave bands was pretty haphazard. We'd hear the occasional song from the Clash on the radio, or a friend would turn you on to his copy of a Ramones album, but for the most part you were on your own. The Talking Heads didn't really get much traction until Speaking in Tongues broke them open in '83. Somewhere along the line I picked up Remain In Light (on a cassette from the chain music store at the local mall), which remains my favorite album of theirs, perfectly split between the upbeat dance-oriented tracks on side one and the Eno-driven ambient tunes on the flipside (broken up by their finest moment in "Once In A Lifetime"). It was only later that I worked my way backwards to the debut.

And I loved it from the first listen, though it was radically different from Light. Byrne's playful eccentricity was in full bloom from the start, with charmingly silly ditties like "Don't Worry About The Government" and "Tentative Decisions" instantly winning me over. You've got the creepy tour de force of "Psycho Killer" offset by the delicious joyfulness of "Pulled Up." It was one of those albums that had me scratching my head wondering why it didn't break through right away; sure, it sounded nothing like what was getting played on the radio when it came out, but it was so relentlessly infectious and disarming. What's amazing is that, for all the band's stylistic changes over time, and the baggage of their break-up, I find it as winning today as I did four decades ago, one of those albums that never fails to get me smiling.