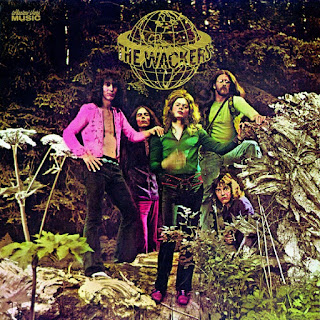 Ah, yes, the Wackers--and, c'mon, really, the Wackers???--fit neatly into my obsession with largely forgotten early 70s pastoral Americana. The first of 3 albums (4 if you count the late 60s release by the band Roxy, mostly the same guys), Wackering Heights is a lovely blend of harmonized folk/country-rock reminiscent of CSN and the Byrds with touches of British pub rock (early Brinsely Schwarz, Help Yourself). (See also Starry Eyed & Laughing.) Despite the band's glammy look on the cover (and, ok, there are some hints of glam and power pop), this is clearly the work of a SoCal (later Montreal) band, proto-yacht rock that stays in the mellow lane with only occasional ventures out into a bit of boogie (their glammy cover of "Don't Be Cruel").

Opener "Travelin' Time" lays down the blueprint, a band that heard what CSN were doing, probably checked out American Beauty a few times, and gave it a shot. If you're a sucker for blissed-out harmonies and jangly acoustic guitars, cue up "Country Queen" and kick back with some tequila and 'ludes. Nice, right? They turn up the amps (just a little) on tunes like "I Don't Want My Love Refused," but then cool back down with the harmony-drenched, very very seventies-sounding "White House."

Here's a video for "Refused" (and, hey, what's with all the crotch shots? Ugh!):

How about a really corny kittens-and-kids slide show backing an audio rip of "Such A Good Thing"? Sure, why not: