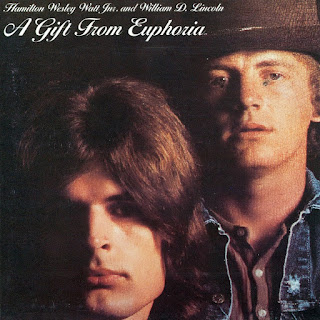 Despite a seemingly endless well of obscure, long-out-of-print 60s psychedelia, this little gem still manages to stand out as one of my favorites (or at least among the strangest). It's a weird blend of Gram Parsons/Michael Nesmith- styled country rock, fuzzed out acid rock guitars, and symphonic orchestration and sound affects. It sounds like a cross between the Byrds' Notorious Byrd Brothers and the trippy curiosity the United States of America. Alas, while I try to focus these posts on readily available music, this one doesn't stream and can't be bought, though it can be found on YouTube.

One of those legendary "great lost records," Gift was the sole release from a couple guys in Southern California, William D. Lincoln & Hamilton Wesley Watt, Jr. It starts off strangely, with a quiet symphonic ballad, sounding like an outtake from the Moody Blues' Days of Future Passed, but kicks in with the next track, "The Stone River Hill Song," pretty much straight Gram Parsons-styled bluegrass-tinged country rock. But the real treat comes next. After a brief banjo intro, "Did You Get The Letter" is a trippy, kitchen-sink psychedelic masterpiece, with fuzzed out guitars, a Byrdsy hook, and a full-blown studio-crazed sound effect freakout in the center. Imagine the soundtrack from the Monkees' Head condensed into a single epic suite.

The rest carries on in similar fashion, bouncing between cosmic Americana and more headphone-friendly psychedelic excursions, with disorienting symphonic interludes.

Again, you can't find the damn thing anywhere (maybe I can help), but check out the YouTube rips. And while this was the duo's sole album, Lincoln went on to release another album in 1971 (as Addie Pray) called Late For The Dance; it drops the psychedelia for a more straight country-rock sound, but it's actually pretty decent and often quite lovely (and, unlike Euphoria, it streams, so you can check it out).

Grab the headphones, here's "Did You Get The Letter":

...and another standout, "Sweet Fanny Adams," a rousing country-rocker:Here's side one of the original LP (tracks 1-4) on YouTube:...and side two (tracks 5-9):Here's the Addie Pray album on Spotify: