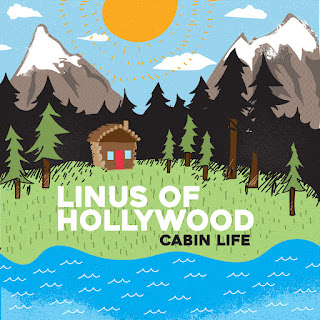 I've mentioned previously my love of artists who recreate Brian Wilson's mid-60s baroque sunshine pop palette, bands like the High Llamas and Explorers Club and Wondermints all making music that sounds like cast-offs from Pet Sounds/Smile-era Beach Boys with only the slightest of updating. Another favorite in the genre is Linus of Hollywood, basically the work of LA musician Kevin Dotson handling most of the instruments and vocals (but we'll just call them Linus for present purposes).

Their music is largely gentle, beach-friendly, and piano-driven, much more on the sunshine pop side of the power pop equation. Earlier records, like the wonderful Let Yourself Be Happy from 2001, were particularly Pet Sound-alikes; but I really enjoyed the most recent one, 2018's Cabin Life. There's a (slightly) broader sonic palette at play, a bit more of a crunchy guitar snap in spots, though it largely stays in that Wilsonian safe space. Dotson sounds a little bit like Glenn Tilbrook at times, giving a few songs the feel of an Americanized Squeeze.

"At All" is typically delightful, melodic and infectious; "Wasted And In Love" reminds me of Shoes, a slightly new wave-tinged skinny tie gem; "Won't Let It Get Me Down" is as close as they get to more upbeat, Beatlesque power pop, shades of Fountains of Wayne; and "Until You Said Goodbye" is particularly Squeeze-reminiscent. Elsewhere, like on the opening title track and the gorgeous "Snow Day," they leave the beach for more stripped-down, wintry lake-side outings, a bit quieter yet no less catchy, while the sprightly "Green Valley Lake" lands somewhere in the middle.

The album is pure summer sunshine, perfect to jumpstart spring's impending arrival. Give it a spin, and crank up some guaranteed smiles.