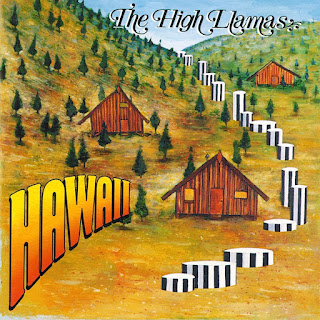 A lot of indie rockers worship at the altar of Brian Wilson (not so much the early surf music, but more the experimental musical soundscapes and vocal affectations of Pet Sounds and the once-mythical Smile). A friend used to share a series of mixtapes he made called Pet Soundalikes, which he'd fill with with like-minded artists like the Wondermints, Linus of Hollywood, etc.). And one of the most reliable players in the field is UK export the High Llamas (largely the project of frontman Sean O'Hagan).

1996's Hawaii is arguably the band's masterpiece, certainly its purest statement of intent, essentially an alternate universe Pet Sounds/Smile (albeit without the upbeat pop songs like "Wouldn't It Be Nice" and "Good Vibrations," and much greater emphasis on the sonic moods). A sizable chunk of Hawaii is instrumental, incidental soundtrack music, recreating Smile's pastoral Americana pastiche with its pianos and intermittent banjos, updated with the occasional unobtrusive synth accents.

But it's the vocal tracks which are most magical. Sure, for the most part, they share the same cinematic aesthetic as the instrumentals, O'Hagan's gentle Beach Boys croon more another instrument in the mix than demanding attention, but the vocal tracks at least provide a few hooks to grab your attention. And a few stand up well as actual, well, songs, rather than pieces within a broader sonic tapestry. "Theatreland" is wondrous pop, the one that might work best even freed of the album's overall concept; "Nomads" has the same loping studio-wiz cosmic Americana as some of the Wilson/Van Dyke Parks Smile tracks; "Peppy" is a lovely ballad, just a bit, yeah, peppy.

Sometimes I'll program the CD to play just the vocal tracks, a pithy but compelling record somewhere between EP and LP length; sometimes I'll take in the longer, more instrumentally-inclined work. Either way it's pretty miraculous.

Here's the video for "Nomads":

Here's an audio rip of "Theatreland":...and "Peppy":Sadly, Hawaii doesn't stream, but here's a rip of the whole album on YouTube. Meanwhile, here's 2003's Beet, Maize & Corn, which revisits a similar aesthetic (albeit with more sugary strings).