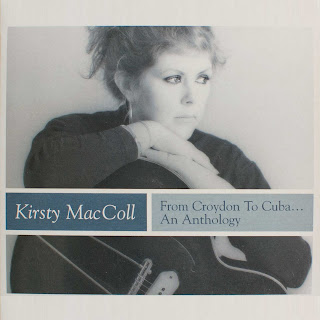 Spent last night spinning some Kirsty MacColl, and it's always so bittersweet--such an incredible vocal talent, with plenty of wonderful originals and a knack for covers; but also haunted by sadness, with a peripatetic career jumping around among record labels and never really getting her due, and ultimately suffering a truly tragic death while on vacation with her children.

I picked up this compilation when it first came out, which was a good thing, as it, like a lot of her work, is out of print. I'm particularly partial to her earlier, New Wave-era singles, though I love her later, more pop-oriented work as well.

The early stuff manages to rise above, and charmingly embrace, its cheesy New Wave affectations, cheap synths and cramped production, as always through her delightfully charming vocals and often enchantingly clever lyrics. Her 1979 debut single, "They Don't Know," is one of the most perfectly infectious pop tunes ever, and that impossibly high post-solo "Baby!" an indelibly wondrous moment. Singles like "Terry" capture her 60s girl group affectations, while the chipper "Patrick" is the perfect meet-cute smiler. And then, of course, the covers... her unforgettable take on Billy Bragg's "A New England" (with additional verses he wrote just for her), and later interpretations of everyone from the Kinks to Lou Reed. She also had a way with faux-country, the rollicking "There's a Guy Works Down the Chip Shop Thinks He's Elvis" absolutely terrific.

And while it didn't get the same traction in the US as in the UK, her collaboration with the Pogues on "Fairytale of New York" may be the best rock-era Christmas song this side of Big Star's "Jesus Christ."

I don't spend as much time with her later albums, which saw her ranging from straight adult-oriented pop to world music, but even where the stylings weren't up my alley, that voice always drew me in.

Anyway, as I mentioned, some of her stuff is hard to track down, but a fair amount of it streams, so check out what you can.

...and "Chip Shop":...and "Terry":..and, of course, "Fairytale." Happy holidays!Here's a collection of her early singles: