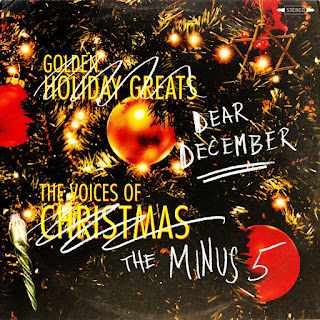 Merry Christmas for those of you who partake. And for those of us who don't, and tend to look to the musical smorgasbord at this time of year with a mix of apprehension and dread, here's the rare Christmas album we can all enjoy.

Yeah, I was talking up The Minus 5 just a few weeks back (and have already slathered plenty of love on frontman Scott McCaughey's other band, the Young Fresh Fellows), but since this was the disc I pulled up this morning to get in some holiday cheer, figured I'd circle back to ol' Scott.

In most respects, Dear December sounds like much of McCaughey's repertoir, full of jangly power pop and clever lyrical twists. But he brings along not just some seasonal themes, but a bunch of friends -- including Death Cab for Cutie's Ben Gibbard, the Decemberists' Colin Meloy, Americana chanteuse Kelly Hogan, and M. Ward & Chuck Prophet. As usual, Peter Buck is along on guitars, while Buck's old R.E.M. bandmate Mike Mills drops in to sing the only great Hanukkah song I know.

Gather 'round the tree (or the menorah or just a big ol' fire), mix a few Cosmos, and treat yourself to a charming indie pop smile. You can buy it at Bandcamp.

...and an audio rip of "Festival of Lights (Hanukkah Song)"":