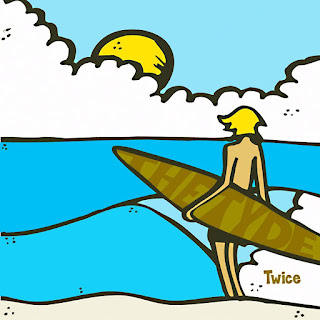 The Tyde were one of myriad interrelated 90s/00s-era bands in the SoCal cosmic Americana universe based loosely around legendary jangly psyche-country act Beachwood Sparks. After that band broke up, bassist Brent Rademaker joined up with his brother Darren to form the Tyde (along with a few other Sparks refugees), with Darren handling the songwriting and vocals. While not hugely dissimilar aesthetically, the Tyde swap out some of the Sparks' country vibe for a more Beach Boys-friendly gentle surf sound. Rademaker conjures up some of Pavement's quieter moments as well (or, more specifically, Pavement guitarist Scott Kannberg's work with Preston School of Industry).

Anyway, forget the indie rock name-dropping; all you really need to know is that the Tyde released a few albums of sweetly shimmering, mellow California grooves, lovely and melodic, strains of Brian Wilson and early 70s Grateful Dead wafting in and out of the mix. While their work is consistently solid across the board, I'm partial to their second album, Twice, which augments the blissed-out sweetness with some more upbeat pop, like on the bouncy "Henry VIII" and "Go Ask Yer Dad" and "Crystal Canyons." And the sprawling closer "New D" sounds almost like a great lost Pavement tune.

There's a ton of essential music to be found in the Beachwood Sparks/Tyde songbook (as well as Brent Rademaker's current band GospelbeacH), but this is one of the more entrancing, engaging entry points.

...and some blurry live footage of "Go Ask Yer Dad":