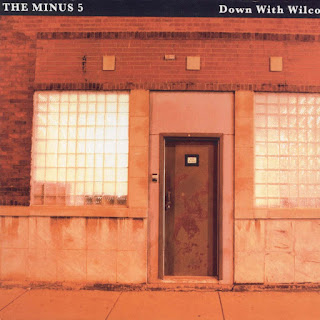 Scott McCaughey, the hardest working man in indie rock, seems to be shooting for Robert Pollard-like levels of productivity these days. We've just been treated to the latest outing of reliably fun party music from his original band, the long-running Young Fresh Fellows; and earlier this year he had a supergroup debut with the No Ones (featuring R.E.M.'s Peter Buck and Norwegian power-poppers I Was A King), not to mention a solo album of unorthodox Neil Young covers (as Scott the Hoople); and that was hot on the heels of last year's work with yet another supergroup, Filthy Friends (led by Sleater-Kinney's Corin Tucker) and his other long-running band, the Minus 5 (comprised of McCaughey, Buck, and various indie rock luminaries) -- all of which came out after Scott had suffered a serious stroke. Good lord!

One of my favorite entries in the intimidating SM canon is the Minus 5's 2003 collaboration with Wilco. Recorded in 2001, contemporaneously with Wilco's legendary Yankee Hotel Foxtrot, Down With Wilco bears a clear relationship to that album, augmenting the Minus 5's offbeat, Americana-tinged indie pop with some Brian Wilsonesque studio sheen and a more expansive sonic palette than the typical Minus 5/Young Fresh Fellows outing. There is plenty of McCaughey's playful pop here, most notably the delightfully pointed yet bubbly "I'm Not Bitter" and the perky "The Town That Lost Its Groove Supply" (featuring some vocal contributions from Wilco's Jeff Tweedy) and "Retrieval of You." There are also slower, more atmospheric yet still catchy tunes, like "Where Will You Go" and "Dear Employer."

Tweedy takes a vocal lead on "The Family Gardener," a great lost Wilco tune that has inexplicably never worked its way into Wilco's live set, but otherwise it's still a classic McCaughey album, jangly tunes and clever lyrics, just mellower and a tad more musically adventurous.