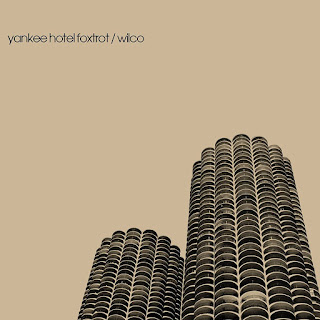 Having spent the past week in election mode (and still nervously trying to distract myself) -- which is why I've been slow to post lately -- I've been relying on old favorites to get me through. And re-listening to Summerteeth's amazing follow-up was a helpful reminder of what an insanely wonderful record it is. Given how relatively poppy a lot of the songs are -- "I'm The Man Who Loves You," "Heavy Metal Drummer," "Kamera," "War On War," and perhaps Tweedy's finest ballad, the truly gorgeous "Jesus Etc." -- it's astounding to think that the record label found it so commercially non-viable that it led to a drawn-out dispute that delayed the album's release for a year until the band could find an indie label to run with it. (The whole fiasco is detailed in the I Am Trying To Break Your Heart documentary, truly a must-watch for any music lover interested in a warts-and-all behind-the-scenes look at intra-band dynamics, the creative process, and the music business.)

Which isn't to say that the album isn't as noteworthy for its sonic experimentation as it is for the caliber of the songs. Opener "I Am Trying To Break Your Heart" is a sonic masterpiece, pure headphone candy, alternating musical restraint and noisy discordance while wrapped around a catchy hook and some of Tweedy's most memorably opaque lyrics. Slower tunes like "Ashes of American Flags" and the lovely "Poor Places" use studio ambience and stray musical interjections and intermittent sonic assaults as a featured component of the sound while remaining beautifully entrancing.

I've got a bootleg collection of demos that confirms just how outstanding the songwriting is on the album, and how it can be enjoyed at least as much when separated from its more experimental (and, yes, perhaps at times intrusive) studio effects. But the final product is a wonder, easily one of the best records of the past 2 decades.

...and a live "I'm The Man Who Loves You":...and a live "I Am Trying To Break Your Heart":Here's "Heavy Metal Drummer" from the documentary:
File Under: 2000s Indie Rock Wilco