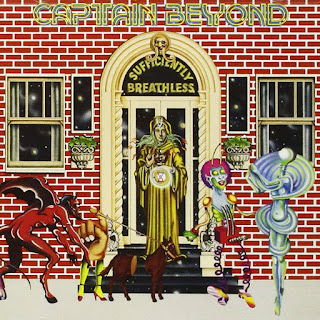 After yesterday's blurb on Captain Sensible, I figured I'd just keep plowing ahead with the Captain motif. (I've already hit Captain Beefheart, so maybe that leaves the Captain & Tennille?).

As for Captain Beyond: Nope, not a band I care for. Can't say I've ever even listened to this album all the way through.

So why post it here? Because the title song kicks all kinds of ass. It's that rare album you buy for one song alone, and that song is worth the price of admission.

The band were sort of a proggy, jazzy, hard rock amalgam -- not shocking given that it was a supergroup of sorts, frontman Rod Evans having been the original singer for Deep Purple (circa "Hush"), joined a couple dudes from Iron Butterfly and a drummer who'd played with Edgar Winter. So, no, not really my gig.

But damn, that song. It's a little proggy, a little folky, expertly weaving gentle acoustic guitar strums with an infectious electric riff, with surprisingly pretty vocals and a wicked cool jam. I remember hearing it for the first time while I was driving around back in law school, the local classic rock station having dug deep into the vaults to pull it out, and just sitting in my car until it ended. One of those musical moments that stays with you. At the time, you could only find the out-of-print vinyl at a huge mark-up at independent record stores, but years later I finally tracked it down on CD. And realized I had no interest in the rest of the album (ok, there's one other song, the mellow "Starglow Energy," which is ok, but for the most part it's kinda bad, reminiscent of the crappy Styx albums I heard as a kid). But I could play that title track on auto-repeat endlessly. It also works particularly well on mixtapes.

So, no, I don't recommend that you buy the album, but if you're ever in a mellow, proggy mood, pull up that one tune and put on the headphones and float away.