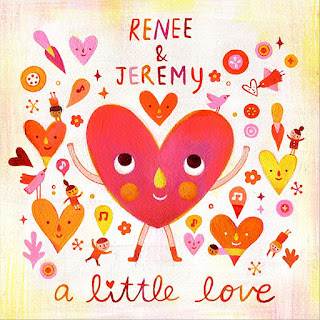 This is the first (and likely last) "children's record" I'm posting in these parts, but it's the sort of thing I wish was around when my kids were young (we were instead stuck with a lot of Barney and Wiggles music). If you've got kids, or you just need a sweet little gem to sand off some of the election-related cynicism and nastiness as we ease into the holiday season, consider this a public service.

Renee Stahl & Jeremy Toback have recorded a few albums, wistful interwoven vocals and wispy acoustic guitars, campfire lullabies to calm the kiddos. While prior releases were primarily originals with the stray cover, this one is dedicated to cover versions, a largely well-chosen assortment that includes R.E.M., John Lennon, Queen, Supertramp, Simon & Garfunkel, and the Monkees. (I'm willing to forgive the inclusion of a song from the world's most terrible band, the Red Hot Chili Peppers, not to mention Coldplay, just because they manage to make them listenable.)

Full disclosure, Jeremy is an old college friend of mine, but he comes into this with plenty of rock & roll bona fides, having played bass in 90s grunge band Brad (a project helmed by Pearl Jam's Stone Gossard) as well as having a brief solo career, releasing a few albums of edgy singer-songwriter alt.rock. (And most notably, he played in our favorite college band back in school, the Noise Petals.)

Anyway, this is just lovely, buy it for the kids this Chrismukkah (or as your own home-alone guilty pleasure).

Here's a video for their version of Coldplay's "Yellow":