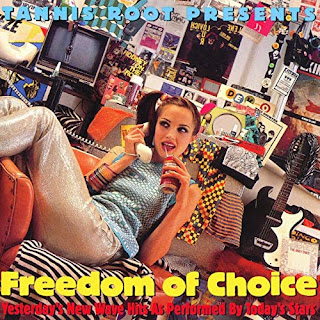 The mad outpouring of tribute albums in the early 90s was a mixed bag. Occasionally you'd get relatively decent artists giving a new twist to your favorite songs or, even better, songs you might not care for in their original form. (As noted previously, the Carpenters tribute is a personal favorite.) But more often you'd get some minor artists offering rather bland treatments that didn't add much to the originals.

This is one of the better ones. The album features a litany of 90s alt.rock superstars (some enduring, some... less so) with their take on various New Wave-era hits & misses. (Plus, as a bonus, the proceeds went to Planned Parenthood.) And while much of this is, like any tribute album, truly inessential, there are a handful of tunes I still listen to today.

As usual, Sonic Youth drops by and provides the stand-out track (see also their tributes to the Beach Boys, Neil Young, and the afore-referenced Carpenters). In this case, they take the slightly fringe-hit "Ca Plane Pour Moi" by Plastic Bertrand and give it the Sonic Youth treatment, a blistering barrage of guitars that demands testing the limits of your speakers, the nonsensical French lyrics washed in fuzz. Yo La Tengo similarly refashions (but just barely) Blondie's "Dreaming" as a fizzy indie rock pop tune, as do the Muffs with the Paul Collins Beat's "Rock & Roll Girl"; Redd Kross amps up the Go-Gos' "How Much More"; Superchunk turns Devo's "Girl U Want" into... well, a Superchunk song; the Connells provide a faithful but still enjoyable cover of Split Enz's perfect pop tune "I Got You." The album closes out with Soul Asylum's joyously sloppy revisit to the Vibrators' bubblegum-punk "Baby Baby."

Again, nothing here that's gonna change your life, but a fistful of fun nonetheless.