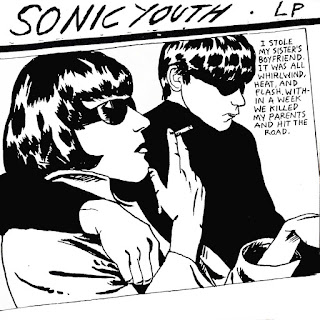 Like many Sonic Youth fans of my era, I'm particularly wedded to their last two indie albums, 1987's Sister and 1988's Daydream Nation. It was on those two that they successfully wedded their experimental noise collages with serious hooks, delivering songs that were surprisingly catchy, but still a long way from commercial radio friendliness.

When they signed to Geffen, there was some concern their rougher edges would be sanded off (as certainly happened to varying extents with contemporaries like R.E.M., the Replacements, and Hüusker Dü, all 80s college radio bands who made the leap to the majors with mixed success). And while 1990's Goo adds a bit more polish, one can hardly argue it was a bid for mass acceptance. Yeah, there were some infectious, almost pop-friendly hooks (which got them some rotation on MTV's 120 Minutes), and it sounded pretty fantastic, but the disorienting guitar tunings and feedback-frenzied bursts of noise remained. Personally, I find it every bit as great as Daydream Nation, with a number of songs among the band's finest moments.

As an album opener, "Dirty Boots" isn't quite the eternal epic of Daydream's "Teenage Riot," probably the band's best song, and is perhaps too much of a forced anthem, but it ain't bad, showcasing Thurston Moore's growing comfort as a traditional rock & roll frontman. But the run that follows--damn! "Tunic (Song for Karen)" is another entry in the band's odd reverence for the late Karen Carpenter, and it's brilliant, an unironic ode to the singer's bout with fame and bulimia, and about as tuneful a song as the band would ever produce (not to mention one of Kim Gordon's most compelling vocal performances). "Mary-Christ" is pure post-punk fury, a riff and a growl making fast work. "Kool Thing" is the semi-hit, Kim's mixed-message plea for empowerment rejoined by Public Enemy's Chuck D. "Mote" confirms Lee Ranaldo's role as the band's secret weapon, with what might have been the perfect merger of power pop and post-punk frenzy but for the extended noise jam coda. I can do without Kim's "My Friend Goo," but it's a warm up for "Disappearer," an album highlight that serves as a blueprint for the cleaner, more melodic (yet still boundary-pushing) art-noise that would dominate later albums.

The record's final third is a bit spottier, but as a package it's one of the band's most immediate works, tunefully engaging but jagged enough to scare off casual onlookers.

Plus, the Geffen $$ made room for a shit-ton of killer videos.