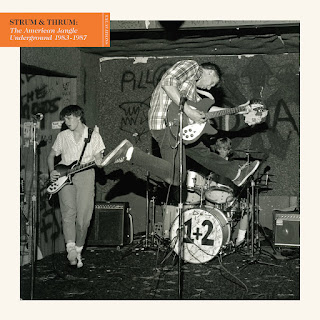 Here's a brand new compilation issued by indie label Captured Tracks, and it's just fantastic. Anyone who has dropped by these parts knows I am a diehard devotee of 80s jangle pop, the post-Byrds Rickenbacker guitars and gentle hooks of bands like R.E.M., the Connells, Winter Hours, et al. But this collection digs deep, unearthing a lot of music I'd never heard and that managed to stay under the radar of even those of us who were college radio DJs with a steady in-flow of underground singles at the time.

The album stays away from the big names and sticks with the more obscure purveyors of the genre. I've mentioned a few of the bands appearing here before -- personal favorites the Primitons and the Windbreakers are included, and perennial indie solo artist Barbara Manning shows up with her early band 28th Day. A few of the bands are familiar to me from my radio days -- Sex Clark Five, Salem 66, Downy Mildew. But otherwise this is new to me. Tons of great tunes that warrant further play, and a number of artists whose other work I'll be busy trying to chase down, if it exists. The opening track by the Reverbs is amazing; Three Hits is another terrific find (they've got an EP available from Omnivore I need to grab). Pretty sure I'll be locked down all week with this one.

Pick it up on Bandcamp and give it a spin.

Here's a video for "Trusted Woods" by The Reverbs: