David Bowie: Metrobolist (The Man Who Sold The World) (1970) 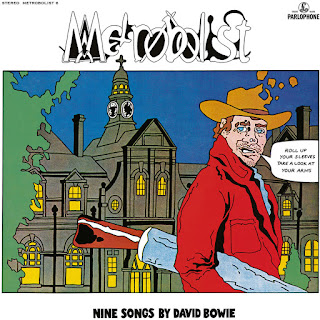 After discovering (and being floored by) Bowie as a pre-teen courtesy of a cassette copy of ChangesOneBowie (at the time his definitive greatest hits collection), I set about digging deeper into his back catalog. Ziggy Stardust, of course, came first, and it remains my favorite (neck and neck with Hunky Dory). Conventional wisdom at the time (which I drew largely from the Rolling Stone Record Guide, my bible as I explored the classic rock canon) was that his pre-Hunky Dory releases were far less essential.

But I sought them out anyway, and was delighted to find I loved them far more than I'd been led to believe I would. His sort-of debut (not counting his 1967 self-titled debut, which was of a different nature altogether), alternately titled David Bowie or Space Oddity, was a blend of folk and prog, certainly of its era yet underrated. The follow-up, The Man Who Sold The World (originally released in 1970, but not until '71 in the US), was radically different. It was loud, heavy, harder rocking than anything else he'd released; and it was lyrically dark, almost scary. It wasn't really the sort of thing I was into, yet I liked it every bit as much as Space Oddity. 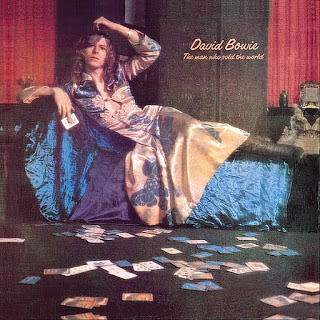 The album is most noteworthy for the playing of guitarist Mick Ronson, who had joined Bowie's band for the album and stuck around through 1973's Aladdin Sane and Pin-Ups, which adds some heft missing from the prior work. But the songs themselves don't get enough credit. The title track, of course, has become far more familiar (largely driven by Nirvana's legendary unplugged cover), but didn't get any play on classic rock radio at the time and was inexplicably omitted from Changes (which completely passed over the album). Opener "Width of a Circle" is an extended hard rock monster, almost proto-metal, sly nods to the queer sensibility that would blossom on later albums, with foreboding sound and a killer riff; "Black Country Rock" is folky-glam, more T.Rex than Bowie; and "Running Gun Blues," dark subject matter aside, is relentlessly catchy. Much of the balance carries on the more prog-oriented, ponderous aesthetic of the prior release, beefed up by Ronson's guitars.

It's just been re-released under its original working title Metrobolist, completely remastered/remixed by longtime Bowie collaborator Tony Visconti (who last year did the same for Space Oddity); and on first listen, the change is palpable. The biggest drawback of the original album was its somewhat sludgy and claustrophobic sound, which was improved somewhat on subsequent remasters; but Visconti remixed much of the album, giving it a clarity that was absent before. It retains the claustrophobic atmosphere of the original, but now has a lot more breathing room. At minimum, it's a great excuse to visit an often underappreciated part of the Bowie discography.

Here's a live performance of "The Man Who Sold...":

...and here's Bowie (as Ziggy), with Ronson, performing "Width of a Circle":