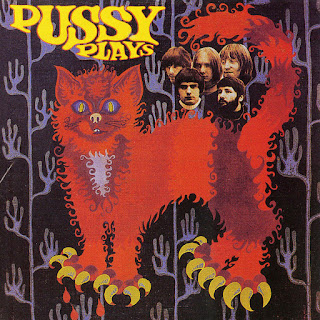 The downside of having a passion for unearthing obscure, forgotten gems from the psychedelic 60s is that you have to wade through a lot of mediocre, badly-dated music to find them.

This, alas, is not one of the gems. Still, I do take a certain pleasure in even mediocre, badly-dated music from that era. And, by mediocre, I don't mean bad -- though I have plenty of truly bad psychedelic albums. I just mean the multitude of unmemorable records best served by being represented with a lone track on a Nuggets compilation, yet I still like to dig into the deep-track album cuts.

The acid-happy Pussy (about which little can be found) released a single LP, 1969's Plays -- and, having searched for information about this online, I can personally attest that by no means should you google "pussy plays" on a work computer. As both the band's name and the cover art attest (as does the decision to open the record with the sound of what appears to be a strangled cat), it's a little dubious... but not without some simple joys.

Opening track "Come Back June" (after said strangled cat introduction) is perfectly decent 60s psychedelia, an upbeat, organ-driven riff-rocker (mild shades of Deep Purple's "Hush"), perfect fodder for a '69 compilation. The album goes downhill from there, sticking to organ and guitar-driven garage rock and proto-prog, with all the trippy silliness of the age (spooky basslines, vaguely raga-esque keyboard solos, silly spoken word interludes). There are also a few wigged-out instrumentals (like the dorky "Comets," full of moog-like effects and stoned chants and a ridiculous spoken-word outro) that sound like they were written for the soundtrack of a terrible late 60s Roger Corman film.

So, no, not a ringing endorsement, but for those who share my passion for inconsequential yet amusingly period-specific psyche, you'll get a kick out of it.

Here's an audio rip of "Come Back June":