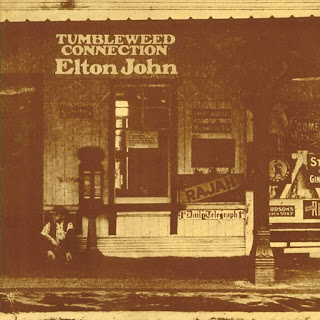 If 14-year-old me knew that 54-year-old me would one day be praising the work of Elton John, he'd have been pretty surprised, if not downright pissed. Back in the earlier days of my rock music obsession, Elton was on the short-list of artists for whom I had not just disinterest, but outright antipathy (see also, e.g., Steely Dan, Fleetwood Mac, Dire Straits, the Eagles). His radio-friendly pop was way too mainstream, or even schlocky, for my emerging hipster taste.

But in recent years, I've mellowed on a lot of those bands. While I'm hardly a fan, I do find a lot of their music to be perfectly fine for quiet Sunday mornings at home, appreciating their musical craftsmanship (aided, in the digital era, by some phenomenal sound). It took me longer to come around on Elton John, but I've come to appreciate his earlier albums (and even some of the pop hits; "Rocket Man" is just a great freakin' song).

I probably like Tumbleweed Connection best, as it's the one that sounds least like an Elton John record. John and lyricist Bernie Taupin were at the height of their obsession with American music, and Tumbleweed sounds more like traditional Americana, strains of country and gospel and R&B, than much of John's piano-based pop catalog. Musically and lyrically, it could almost pass for an album by the Band, John's vocals aside. The guitars are more prevalent, the songs more sprawling and lyrical than hook-based. And the absence of classic rock hits (aside perhaps from "Burn Down The Mission," still not exactly a radio mainstay and a more interesting track than many of his better-known numbers) helps it avoid the personal baggage that haunts much of his music for me. I'll never be a huge fan of John's vocal affectations, but some of his campier excesses are kept to a minimum here.

Of course, the best song is an outtake found on CD reissues, an early version of "Madman Across The Water" featuring David Bowie guitarist Mick Ronson, which sounds more like the darker, heavier prog of early Bowie than classic Elton John, and Ronson's leads (omitted on the later version) are monstrous.

Here's an audio rip of "Amoreena":

Here's a live take on "Burn Down The Mission":...and a live performance of "Ballad of a Well-Known Gun" some 40 years later: