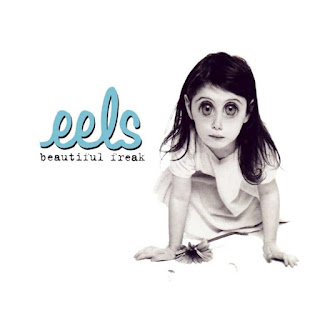 Eels -- essentially the rotating cast of musicians centered around singer-songwriter Mark Everett -- just released a new album, Earth to Dora (pretty solid on first listen); this sent me scurrying back to re-listen to their discography and update my home-brewed Eels compilation (which I've inserted below).

While there have been some great Eels albums over the past quarter-century (2005's Blinking Lights & Other Revelations is a personal fave), I'm still loyal to the band's 1996 semi-debut, Beautiful Freak. (Not actually a debut, as Everett had previously released two like-minded albums simply as E, which are every bit as great; indeed, 1992's A Man Called E, previously discussed here, is just fantastic.) To be sure, Freak is definitely of its moment, a pure encapsulation of mid-90s alternative rock, so idiosyncratic in its blend of Everett's introspective, depressed, and sometime nihilistic ruminations alongside prickly guitar rock perfectly suited to the post-grunge moment that it almost begged to be slagged off as an instantly dated one-shot. Hit alt.rock single "Novocaine for the Soul" certainly risked being relegated to the dustbin of 90s history alongside, say, Len's "Steal My Sunshine" or Blind Melon's "No Rain." But that song aligns more closely with Radiohead's "Creep" or the Flaming Lips' "She Don't Use Jelly," a fluke single from a band that had far more to offer, and much greater durability, than the oddball single suggested.

Of course, "Novocaine" benefits from being a freakin' awesome song that holds up well. And it's not alone. "Susan's House" is a terrific blend of tunefulness and narrative, an Everett trademark; "My Beloved Monster" is also a wonder, albeit one hard to hear without some tarnish from being an indelible part of the Shrek soundtrack.

Everett's oft-bleak vision can be tough, particularly on some latter-day albums, but on Freak he was at least as focused on joining his darker poetry with near-pop hooks that elevate the album.