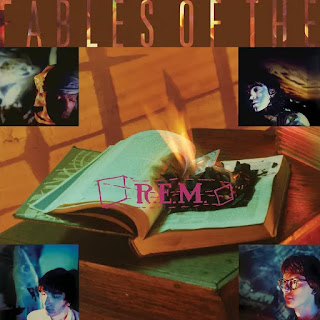 As noted elsewhere in these pages (and described at length in my book), R.E.M. was one of the small handful of bands that truly changed my life. When I was belatedly introduced to them in 1984, upon my arrival at college, it was a revelatory experience, opening me up to all the music I'd been missing outside my MTV/radio-fueled suburban bubble. Those first two LPs, Murmur and Reckoning (as well as debut EP Chronic Town), rarely left my tape deck that entire year.

So when their third album dropped early in the summer of '85, right around my 19th birthday, I was filled with excitement and trepidation. This was my first time being exposed to a new R.E.M. release at the same time as everyone else, rather than being let in on some special secret and feeling a little behind the curve; my chance to be part of that universal moment of discovery.

And it was... underwhelming.

Fables of the Reconstruction's opening track, "Feeling Gravity's Pull," with its haunting 3-note minor chord riff (perhaps an inversion of sorts of Pink Floyd's "Shine on You Crazy Diamond"), discordant guitar stabs, and creepy atmospherics, lacked the warm jangle of the earlier work. (It also lacked the pleasing backing vox of bassist Mike Mills.) It wasn't a bad song (the slide from the minor-key verse into the major-key chorus is just lovely), just not what I was expecting.

And I really disliked the lead-off single, "Can't Get There From Here," a more traditionally rocking song than the gentle Peter Buck arpeggios I'd fallen in love with, Stipe moving beyond his cryptic mumbling into classic rock star poes. (To this day, it's probably my least favorite R.E.M. song from their pre-Warner Brothers era.) Plus, it was getting some airplay, and I can't pretend that my excitement at seeing the band getting a bit of mainstream attention wasn't tempered by some indie rock snobbery, our college radio standard-bearer no longer the dominion of the privileged few.

Still, there were plenty of blissful, jangly tunes that recalled the glory of Murmur/Reckoning. Fantastic songs like "Maps and Legends," "Green Grow the Rushes" (my favorite song on the LP), "Kohoutek," "Good Advices," and lovely closer "Wendell Gee." And follow-up single "Driver 8" is an undeniably great song, bridging their early sound with their looming pop chops. I'd spin these over and over, sometimes skipping the ones I enjoyed less, like the dark "Old Man Kensey" (which sounded a bit like a "Gravity" reprise), and the frenetic, at times almost abrasive "Auctioneer."

Over time, the album has steadily continued to grow on me, and these days is something I'll reach for almost as often as its predecessors (still skipping over "Can't Get There"), their last to capture the sound I fell in love with before 1986's Life's Rich Pageant moved them ever-closer towards a radio-friendly straight-ahead rock sound. The darker tunes, even the creepy "Gravity," lend to the album's overall haunting aesthetic; and if you weave in contemporaneous b-sides like "Bandwagon" and their cover of Pylon's wondrous "Crazy," it's all the better.

Here's a live "Green Grow The Rushes":...and a post-fame live "Maps and Legends":