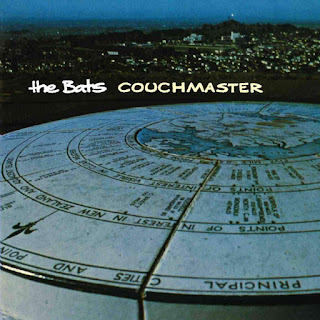 New Zealand's enduring indie rock act The Bats, a longtime favorite, have a brand new album out, Foothills. It's a fine album, another batch of consistently winning, often understated tunes (though frontman Robert Scott's voice continues to move into a more grizzled, bluesy terrain, a bit rawer, kinda reminding me of a similar shift for Glenn Mercer, singer for the like-minded Feelies). You can check it out and grab a copy over at Bandcamp.

But I thought I'd dig deeper in the vault today. While my favorite Bats album has always been their full-length debut, 1987's phenomenal Daddy's Highway (already written about here), which perfectly melded the pastoral, jangly sound of the Feelies with the rougher, more Velvet Underground-esque edge of New Zealand's legendary The Clean (where Scott served double-duty as bassist), 1995's Couchmaster is a close second.

After a few albums which saw the band gradually moving into a slightly more polished, alt.rock radio-ready sound, Couchmaster, an outlier in the band's catalog, is a much more atmospheric, gauzy album. Although the band's trademark jangly (and occasionally rocking) little tunes are present, there's a psychedelic haze that hangs over the record, making it better suited to zoning out on the sofa with a pair of headphones (or maybe that's just what the album title suggests to me). Album opener (after a brief prelude) "Afternoon In Bed" sets the mood, a Yo La Tengo-like guitar drone underlying a wispy verse before the frenetic, heavy chorus interjects itself. It's a weirdly schizophrenic tune, and a great one.

"Around You Like Snow" is another one that calls to mind Yo La Tengo, a noisy wash of distortion almost burying the band; songs like "Work It Out" and "Land O' Lakes" return to the band's more traditional jangly folk-pop sound; while the driving organ and guitar workout "For The Ride" is an atypically energetic fizzy rocker, the Bats at their most riveting.

At 17 songs running nearly an hour (including a few short interludes), the album feels a bit sprawling, like their Wowee Zowee, but if you've got the time, it's worth the investment, a rich tapestry of Velvety haunts. (After this release, the band took a ten-year break, since which time they've been steadily releasing respectable, if less immediate, records.)

Here's the video for (an abbreviated, single version of) "Afternoon In Bed":