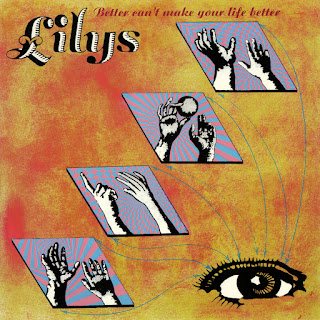 Washington, DC-based Lilys have been kicking around on-and-off since the early 90s, trying out a few genres along the way. Their earliest work was pure shoegaze, 1992 debut In The Presence of Nothing sounding like a My Bloody Valentine cover band (albeit a really great one). But by 1996's Better Can't Make Your Life Better, they'd made a dramatic switch, with an album full of light, whimsical, retro-60s pop-psyche, a kindred soul of Elephant 6 mainstays like Olivia Tremor Control and Apples in Stereo (with echoes of early Of Montreal).

Opener "Cambridge California" could be a great lost Apples tune (ditto the title track), skewed and jittery baroque pop; "A Nanny In Manhattan" shows a relentlessly creative band going a little nuts with all the studio has to offer, a swirling blast of OTC and XTC. "Shovel Into Spade Kit" dusts off some Kinks-friendly riffs and messes them up with lysergic playfulness. Album closer "Returns Every Morning" rocks a Revolver-esque guitar riff and some Monkees jangle. And in between is all sorts of wonderfully infectious pop with the occasional psychedelic cool-down.

It's a blast from start to finish, hints of nostalgia but fresh and lively. Check it out.

Here's an audio rip of "Shovel Into Spade Kit":