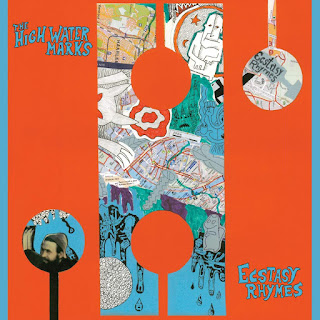 Ecstasy Rhymes sees the High Water Marks reemerging after a long break (their last proper full-length came out in 2007). The band is fronted by Hilarie Sidney, longtime drummer for the Apples in Stereo, and her husband, Norwegian guitarist Per Ole Bratset. While in the Apples (led by her then-husband Robert Schneider), Sidney would contribute one or two songs per album, joyfully perky pop tunes highlighted by her endearingly girlish vocals. With the High Water Marks, she gets more of an even split (while serving as a multi-instrumentalist), with Bratset taking on the balance.

Like her songs with her former band, the tunes are relentlessly upbeat, hook-filled noise-pop, not unlike the early work of Dressy Bessy, another bubblegum-inclined group in the broad Elephant 6 collective for which the Apples served as the, er, core. I tend to be partial to Sidney's songs, drawn in by her charming vox, but everything's perfectly effervescent; for the most part, Bratset's songs/vocals are stylistically similar to Schneider's, making the High Water Marks a logical extension of the Apples (or at least that band's more straightforwardly poppy and less arty/psychedelic side).

Give "Can You" a spin, and if it doesn't help break up this dreadful pandemic holiday funk, I don't know what else is gonna work. "Satellite" is no less peppy. Occasionally the pair will share the mic, like on the terrific "Award Show" and "Pepin Le Bref," something I (as a sucker for paired male/female vocals) wish they'd do a little more.

You can currently stream the album, or find it as a download/vinyl import on Amazon; they have a Bandcamp page, but for some reason the album isn't available there (yet?). You should also check out their first 2 albums, equally bubbly (they also had a 2013 release, but it's pretty lo-fi, maybe demos, with many of the tracks rerecorded for Ecstasy).

I also put together a mix compiling about an hour of Hilarie Sidney tunes from the Apples in Stereo and High Water Marks: