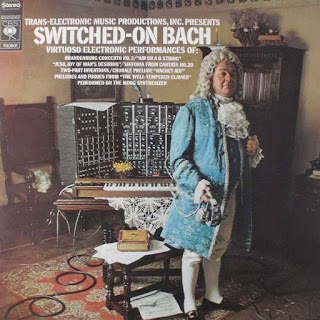 I'll be the first to admit that, while I think I have relatively varied taste within the rock format, my musical pursuits rarely stray far from rockist tendencies.

I don't own a single classical record. And I don't have a lot of electronic music, aside from more obvious artists like Kraftwerk and Stereolab.

But I have tremendous love for Wendy Carlos's synthesized classics. I think I first heard Switched-On Bach back in junior high, when a music teacher played it for us, and I picked up a cassette copy. Hard to say what it was that excited me about the music; this was just as I was developing an obsession for classic rock, and it hardly fit inside my comfort zone. Maybe it was the strangeness of the sound of the Moog; maybe it was the nostalgia it created for Disney World's Electrical Parade, which I had first seen as a small child and whose psychedelic surrealism and bubbly electronica had haunted me ever since. (Later, of course, there was the music's association with A Clockwork Orange, one of my favorite movies, which incorporated Carlos's work so effectively.)

These days, it's pretty damn hard to track down Carlos's music. The albums don't stream, and she is strikingly effective at getting videos using her work removed from YouTube; not sure if the albums are even in print. And throughout history, there has been at least as much focus on her personal life -- her reclusiveness, and her role as an early transgender celebrity -- as on her music. (There's a really nice piece out in today's Guardian, which is what inspired me to cue the music up over breakfast this morning.) At best, maybe you can find the stray online article incorporating some video of her demonstrating the Moog.

So no samples here for the un-initiated. Though I did find a lame imitation of the album on Spotify; not the original, but at least gives a flavor of the music.