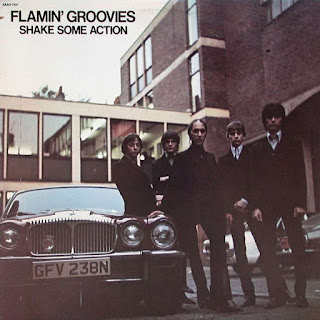 The San Francisco-based Flamin' Groovies started out in the late 60s as an eclectic band blending early Stones-styled rock with 50s oldies and garage-band proto-punk, perhaps best encapsulated in legendary early single "Teenage Head." When founder and frontman Roy Loney left in the early 70s, guitarist Cyril Jordan replaced him with a young singer-guitarist named Chris Wilson, who took the band in a much more pop-oriented direction. After a few years and a couple singles, the new iteration of the band released its first long-player in 1976, and it holds up as one of the definitive examples of chiming, Beatles-inspired power pop.

As seen in the cover photo, the band went all-in with its British Invasion revivalism, but what might have come across as mere stylistic gimmickry is elevated by the band's supply of wonderfully catchy tunes. The title track, of course, makes the short-list of songs one might point to as defining the power pop genre; it's a simply perfect slice of jangly guitars and killer hooks. Every bit as great is the ridiculously infectious "You Tore Me Down," with its wondrous riffs and delirious harmonies (later given a loving rendition by Yo La Tengo). "Yes It's True" will have you checking the liner notes to confirm it came from the pen of Lennon/McCartney, but, nope, it's an original, as are "Please Please Girl" and "I Can't Hide," any of which would have been among the best songs on any pre-Rubber Soul Beatles album. Crazy.

There are a few covers (including the Beatles' "Misery"), but it's the originals that stand up as particularly impressive. And the production by revivalist Dave Edmunds serves the music well.

This iteration of the band followed up with a couple more like-minded releases, perhaps a bit broader stylistically (with more throwbacks to the original band's Stones/R&B inclinations as well as Edmunds' rockabilly grooves, a bit more reliant on covers), though this one was tough to beat. And while it's a pretty essential power pop album, listeners might be best served by picking up 1989's fantastic compilation Groovies' Greatest Grooves, an unusually inclusive collection which culls the highlights of their power pop era as well as some Loney-era cuts. (Conversely, one could go with 2007's At Full Speed, which collects Action and the two follow-up records, plus a few bonus tracks, squeezing them into two CDs with nary a dull moment.)

Here's an audio rip of the title track:

...and "You Tore Me Down":Here's the reunited band, still kicking around, with a performance of "Please Please Girl" a few years back: