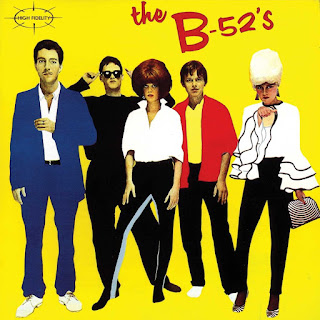 There are the albums in your collection that you love to death and that will always have a guaranteed slot on your playlist. And then there are those that you'll only rarely (if ever) take out for a spin, but so perfectly encapsulate a time in your life that you'll never part with them. This is the latter.

I had just turned 14, about to start high school, when "Rock Lobster" started getting radio airplay. It was quirky, silly, and unlike anything any of us had heard. I was pretty much knee-deep in classic rock discovery mode at the time; sure, I was as up-to-date on new wave hits as anyone else around, partial to the Clash and Ramones and Talking Heads, but ultimately limited by what managed to penetrate our suburban Midwest radio bubble (particularly in those last few years before MTV arrived). But the B-52's debut didn't sound like those bands. "Rock Lobster" was much more a novelty song than suggesting any greater revolution in the music world, but like a few other bands (i.e. Devo) it gave you the sense that there was something cool and interesting happening in the world outside our little enclave. Of course, more than anything, it was delightfully odd and fun, the sort of thing everyone insisted on including on their party mixtapes.

"Dance This Mess Around" was another perennial mixtape inclusion; I actually liked it a little more, as I preferred (and still do) the songs where Kate Pierson and Cindy Wilson's vocals dominated over Fred Schneider, whose abrasive sing-speak yowls I only found tolerable in small doses. And Wilson's "Why don't you dance with me?" exhortation is every bit the cathartic girl-power declaration as Poly Styrene's opening shout in X-Ray Spex's "Oh Bondage Up Yours." "52 Girls" is another favorite, for pretty much the same reason.

Of course, over time, I came to appreciate the legitimately innovative and creative aspects of the band beyond the quirkiness, most notably late guitarist Ricky Wilson's clever updating of classic surf rock twang.

I can't say I listen to a lot of B-52's these days. To the extent I pull out the records, I tend to stick to the hits (I'm partial to "Legal Tender" and "Song For A Future Generation," from 1983's more synth-pop oriented Whammy, which probably has even greater nostalgic poignancy for me than the earlier albums). But any time I hear that first album, it's impossible to divorce from the feeling I had on first listen, a kid just leaving elementary school, the sense of something new on the horizon.

...and a video (a decade later) for "Planet Claire":Here's a live "Dance This Mess Around":