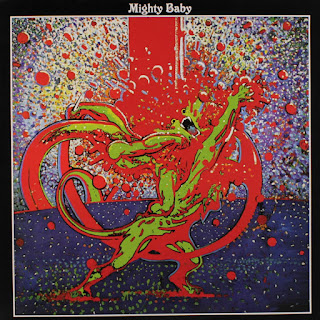 Time to head to the back of my CD racks for some more obscure 60s psychedelia. UK band Mighty Baby eschewed the whimsical aspects of post-Beatles/Floyd British psychedelia, instead opting for a more jam-heavy, earthy West Coast variety, shades of Jefferson Airplane and early Steve Miller Band, but also reminiscent of Traffic, with a few Crimson-esque prog touches.

The band arose from the remains of second-tier British Invasion act The Action, who had some decent mid-60s pop singles, culminating in one of the greatest albums never heard, an astounding set of psychedelic power pop songs that were never finished, though the demos were ultimately released as the must-own (and previously discussed) Rolled Gold.

After that, lead singer Reg King left the band, and guitarist/backing vocalist Alan King (presumably no relation) took the lead. Changing their name to Mighty Baby, the band made a huge stylistic leap. The songs on their self-titled debut are longer and artier, structured tunes with nifty jams, visions of acid-drenched hippies twirling in the sunshine. Opener "Egyptian Tomb" has some mystical riffs, a few horns augmenting a driving but laid-back riff. It's followed by "A Friend You Know but Never See," blazing Woodstock-ready guitar jams. "I've Been Down So Long..." is mellower, folky and pastoral. I particularly love "House With No Windows," with its psychedelic groove and rousing solos, the sort of thing that would seem perfect for classic rock radio but never quite made the cut.

The CD version of the album is padded out with a few tunes recorded by this line-up while still called the Action, bridging their respective styles with shorter pop tunes just starting to veer into psychedelia; "Only Dreaming" is one of those great lost singles that really deserves more renown.

The band went through some weird changes, all the members joining some odd religious sect and recording a final album which drifted much further into quiet Americana. There was a box set not long ago that collected pretty much everything Mighty Baby ever recorded, including some live shows that make a strong case for the band as one of the great early jam bands.

...and "House Without Windows":