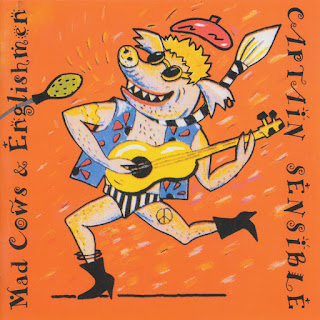 Captain Sensible (stage name of one Raymond Burns) is best known as the co-founder and bassist (later guitarist) for UK punk pioneers the Damned, with whom he still plays today. But he's also released a number of surprisingly colorful solo albums that sound nothing like his regular band, ranging from new wave to power pop, which I'm far more likely to grab than any of the Damned's full-length releases.

Mad Cows & Englishmen was his last solo album (after which he returned to a newly-reformed Damned), and it's a damn shame, 'cuz he went out with a bang, a non-stop barrage of wickedly inventive, very British, humorous and whimsical baroque pop, a blend of XTC, Madness, the Jazz Butcher, and the Cleaners from Venus.

Opener "While Wrecking the Car" is a twisted tangle of Billy Bragg and Squeeze, relentlessly tuneful and sweet. "Bob's Brown Nose" and "Neverland" are more straightforward pop-rock, while "Smashing the Chains" channels classic XTC. Elsewhere, things get a little more quaint, shades of Ray Davies and post-ska Madness, with songs like "Mr. Brown's Exploding Wallet" mining the post-Syd Barrett tradition of British whimsy. And "One Hit Wonders" is guaranteed to have you smiling along ("And when it's over, thanks a lot, now fuck off and die").

Like, say, the New Pornographers, the Captain typically eschews the easy hook, going for something a little more intricate and unexpected, but the melodies always find their way out. The album is a bit sprawling, but poke your way around, you'll find plenty to love.

Here's an audio rip of "While Wrecking the Car":