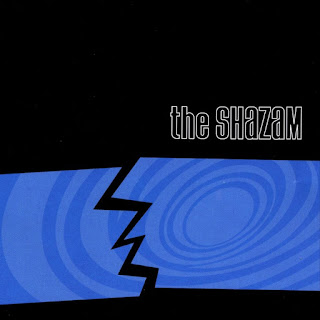 I've previously talked about The Shazam's unbelievably great second LP, 1999's Godspeed the Shazam, where their upbeat power pop got a healthy kick of glam, and was just riddled with insane hooks. Their debut isn't quite at the same level, but it's still a terrific power pop nugget. The band leans more to the hard rock side of things, punchy 70s-styled rockers (drawing the inevitable Cheap Trick comparisons, though I greatly prefer the Shazam to Cheap Trick).

Opener "Let's Away" is a bit more power than pop, but it's promptly followed by "Oh No," a stronger spotlight for frontman Hans Rotenberry's ridiculously infectious hooks. And there are plenty of other highlights, like the mellower, Badfinger-reminiscent "Megaphone,"the amped-up anthem "Hooray For Me," the rousing glam-rock "Rollercoaster," and the melodic mid-tempo "Sleepy Horse," with its total earworm chorus. A personal favorite is the delightfully chipper "Engine Red," a pure pop confection offering a humorous look at the over-indulging guy at the party.

It's a fine introduction to one of my favorite largely-unappreciated bands of the past couple decades (though, again, start with Godspeed).

Here's a mix I put together if you're more interested in a career overview.