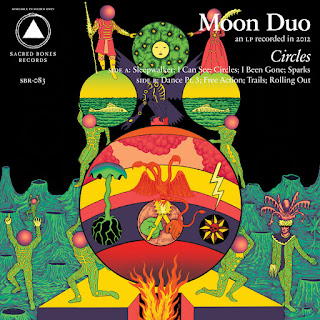 West Coast guitarist Ripley Johnson is one of those "hardest working guys in showbiz" types. He's got his main gig with Wooden Shjips, producing droning, psychedelic guitar freak-outs; and, more recently, a couple albums of diametrically opposed yet equally stoner-friendly pastoral, jangly psychedelia as the Rose City Band (whose Summerlong is one of my favorite albums of the year).

And then there's Moon Duo, featuring Johnson paired up with vocalist/keyboardist Sanae Yamada (which, having released a half-dozen LPs, can hardly be considered a mere side project at this point). Moon Duo shares an aesthetic with Wooden Shjips, largely noisy, droning grooves of spaced-out psychedelia, filtered through with Krautrock and shoegaze and a whole fistful of Spacemen 3, though with a slightly more approachable, melodic feel due in part to Yamada's shared vocals. As trippy headphone music (or blast-it-and-piss-off-the-neighbors music), it's all pretty great, the albums fairly consistent.

I particularly like 2012's Circles, which is infused with just the slightest bit of pop. Opener "Sleepwalker" is a feast of organ and guitar over an insistent thump, super-catchy garage rock; the title track is even perkier, shades of Jesus & Mary Chain-styled post-punk pop combined with a great-lost-1969-nugget hook. As with most of their work, you can be perfectly content just zoning out to the fizzy ambience, but it's also got a greater reliance on pithier, relatively infectious music that holds your attention.

Here's a live take on "Circles":

...and an amusing video for "Sleepwalker":