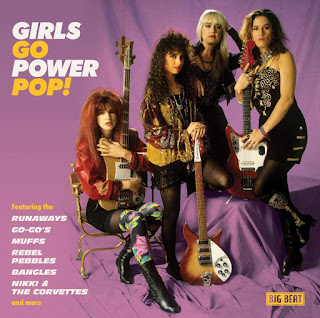 Here's an awesome new compilation that just came out, combining two of my favorites -- power pop and women vocalists. About half of this is obvious, half is new to me, which seems fair. I wouldn't necessarily call all of this power pop, leaning a bit more heavily on 80s new wave-ish acts, but it's in the ballpark. You've got your Go-Go's and Bangles and Pretenders, the Darling Buds and Primitives, and 90s indie acts like the Muffs and Juliana Hatfield. A few picks are a bit odd: It opens with the Runaways' "Cherry Bomb," which seems more of a punk-ish forerunner where some later Joan Jett would've arguably fit in better, but you can never have too many records with "Cherry Bomb" I suppose; and, really, Scandal's "Goodbye To You" is a little too far over the line into mainstream pop for me, but I'll cope.

We can all agonize over which of our favorites are missing (Transvision Vamp? That Dog? Voice of the Beehive?), but, hey, it's a solid 80 minutes of great music, so just enjoy it.

You can pick it up on Amazon or Ace Records. I don't see it streaming on Spotify, though someone has put together their own playlist (with only Holly & The Italians unavailable):