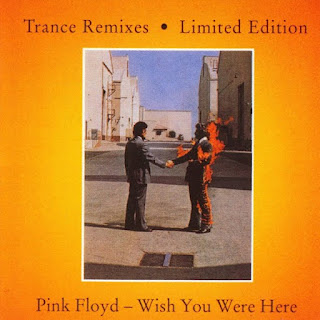 Back in the 90s, before the internet dramatically changed the nature of finding and acquiring rare music, my buddy Mike and I used to regularly attend record fairs, typically held a few times a year and sponsored by the college radio stations. Professional dealers and amateur collectors would set up tables with boxes of vinyl and CDs at the local convention center or at a community college auditorium. My primary focus was amassing bootlegs; it was around this time I set up a website where I could trade live and rare music, back when we'd duplicate cassettes and, later, CDs, and send them back and forth via snail mail.

And at every show, these strange Pink Floyd Trance Remix CDs would show up, unauthorized reworkings of pretty much all the Pink Floyd albums, turned into weird hodge-podges of electronic music. Some tracks simply made minor alterations to the original, blasting the song through walls of reverb and tacking on sound effects; others would loop the song's main riff and turn it into an acid-house dance groove that only vaguely resembled the original. The quality varied dramatically; some collections were pretty cool and worth revisiting, but most were mainly interesting for novelty value and not something I'd play much. The discs were uncredited; there were rumors that some were made by electronic music duo The Orb, or maybe Nine Inch Nails' Trent Reznor, but I don't know if anyone ever ever confirmed who actually created them.

I ended up collecting them all, maybe a dozen or so (including later releases like More and The Final Cut which seemed more like the work of an amateur sitting in his basement with basic software); I distilled the best stand-alone tracks down to an 80 minute CDR, which I still find pretty awesome and will play now and then, but I can't say I've revisited the underlying discs in years. My favorite was probably Wish You Were Here; a large swath of the original album is already pretty ambient, so it lends itself pretty well to a remix. The "Shine On You Crazy Diamond" suite runs through all sorts of variations; I like the opening bit, with the original instrumental played over a dance beat. "Have A Cigar" loops the guitar riff and gives it a hypnotic beat; the title track mostly runs the original recording through various audio filters. The disc is actually reasonably entertaining on the whole, more so than most.

There are a few other fun remixes worth checking out. The remixed "Money" from Dark Side of the Moon is more of a traditional dance track, a bit repetitive (as is often the case with the trance remixes, which tend to extend the tracks) but hypnotic in its way:Also cool: A shortened and messed up reworking of Meddle's "Echoes," from a Trance Remix compilation called Absolutely Ambient:Of course, in the decades since my record fair days, it's become much easier for anyone at home with some affordable mixing software to create their own remixes. One of the cooler ones I've come across is something called the Floydian Propulsion Project. They did a nifty reworking of various Floyd songs; you can find the playlist on YouTube.